MY father served as a captain in the British Army in India during the Second World War. Like many of his generation, he kept his wartime experiences to himself, choosing not to share them with his children. However, he did open up once to my brother-in-law.

He told how one day he and his comrades found themselves quite close to the Taj Mahal. Time was short, however, and they were told they could either visit the famous monument, or stay and have their lunch. My father chose lunch, and forever afterwards regretted passing up the chance to gaze at the Taj

Classic view of the “temple of love”
Perhaps as a result of this, I was always especially keen to see this particular attraction. And it didn’t disappoint.

Though our visit was described as a sunrise tour, it was already light when we arrived at the gates with our guide and joined the queue to get in. It took a while, but eventually we were able to make our way towards the Taj.

First sight of the Taj | Sue and Colin

The first sight of it, framed in a vast arched gateway, was stunning. It is, of course, one of the world’s best-known buildings, an image that is familiar to many from childhood onwards. But seeing it for real for the first time is a special moment.

The point about visiting early in the day is that the rising Sun causes the beautiful ivory-white marble to take on different shades and hues. When we arrived the light from the east made it appear as if the side of the great dome had been coated faintly with gold dust. As the Sun rose further the marble looked blueish, or purplish. It’s a dazzling effect played out on a building that is pretty dazzling to begin with.

You can’t stop photographing it, taking shots from different angles and positions as if you feel compelled to capture its beauty. And for once the cliche is true, you can’t take a bad photo of the Taj.

It’s a large site so the crowds weren’t too much of a problem, though on a particularly busy day they could be. The bench where Princess Diana famously sat alone in 1992, during the time when her marriage to Prince Charles was collapsing, was pretty congested.

Diana’s bench – can you see us in the crowd?

We queued up to go inside the Taj, where we saw the tombs of Mumtaz Mahal and her husband, the Moghul emperor Shah Jahan. He had the monument built to serve as Mumtaz’s mausoleum after she died in 1631 aged 37 giving birth to their 14th child.

Back outside, we continued to explore the grounds as the Taj’s marble walls twinkled in the strengthening sunlight. There are two identical red sandstone buildings at either end of the complex, one to the east and one to the west – the western one is a mosque.

Eventually we dragged ourselves away after what had been a fantastic visit. It’s always reassuring when a really celebrated sight such as the Taj Mahal, or the Great Wall or the Terracotta Army in China, turns out to be as fabulous as you’d hoped. I just wish my father had managed to see it, too.

Top tip: It’s worth hiring a photographer as the professionals know all the bet spots to take your picture with the Taj. They can even take trick shots, such as ones showing the monument reflected in the lenses of your sunglasses, or where you appear to be holding on to the top of the main dome with your hand, like a teapot lid. 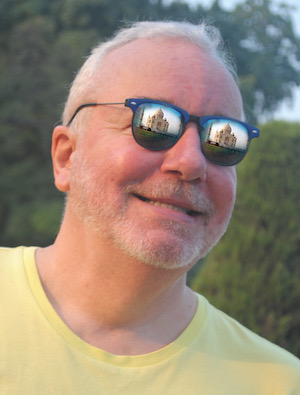 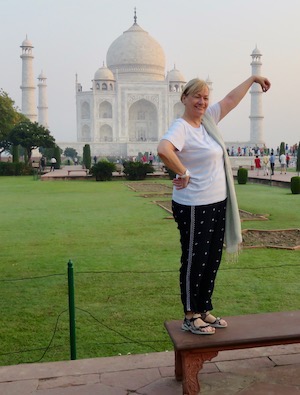 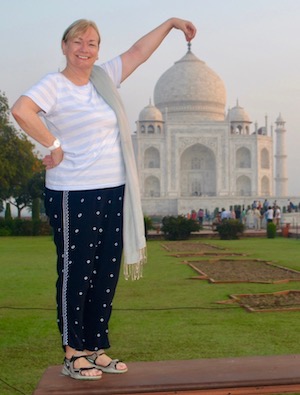 THIS unusual view of the Taj Mahal is the one that its creator, the Moghul emperor Shah Jahan, saw every day for the last eight years of his life.

Shah Jahan had presided over the greatest days of the Moghul Empire, but was deposed in 1658 by his son Aurangzeb, who declared himself emperor.

Shah Jahan spent the remainder of his life under house arrest in Agra Fort. His only consolation was the sight of the “temple of love” where his adored Mumtaz lay, which he could see from the terrace of his chambers.

Seeing the Taj From a Moonlit Garden

WHEN you visit sites that truly are world famous, it can feel like you’ve run out of superlatives to describe what you’re seeing. The Taj Mahal is in this category, which is why I loved our evening visit to Mehtab Bagh (Moonlit Garden).

The Mughals built the garden directly over the river from the Taj for the best possible view of it at sunset. Paired with a tour of the Taj, these two excursions are the best way to learn about the monument and appreciate it. The garden is 25 acres big, and fell on hard times until it was recreated in the 1990s. All that care has paid off; you stroll through orchards and grassed pathways, through beds of hibiscus, roses and lemon trees, and all the while you have the Taj Mahal in view across very pretty grasslands and the river Yamuna. Families gather to picnic here, and children run around freely in the relaxed atmosphere.

But there are no crowds!

Traffic jam as we arrive

Families in the gardens

There were very few visitors on the evening we were there. The “traffic jam” into the car park consisted of a herd of goats and a couple of cars parked near a tea stand. More people arrived at sunset, cameras at the ready, but otherwise it was peaceful and calm so you could concentrate on soaking up the beauty around you as the sky grew darker. That’s amazing, when you think that the son who later overthrew Shah Jahan, who built the Taj, wrote to his father after a visit in 1652: “The Mehtab Garden was completely inundated and has lost its charm.”

View across the river

We were taken to the garden by our guide, a local guy called Asif. It’s about 6 kms out of Agra, and if you don’t have a driver there are plenty of taxis or even tuk tuks you can hire. Asif alerted me to the fires a little way down the river, which were evening cremations. And he also told me that the local population of vultures is dropping drastically due to a painkiller used by vets. The vultures die after eating the remains of animals treated with the drug. Not the sort of conversation I expected on this particular trip, but fascinating.

We stayed in the garden for about two hours, leaving when the moon was up. I walked backwards until the Taj disappeared behind the trees, very grateful that this trip had been suggested to us. I would recommend seeing the Taj from the garden any time of the day, but there was something magical about the moonlight. I liked the goats, too.
Updated January 2020


Last glimpse of the Taj as darkness falls 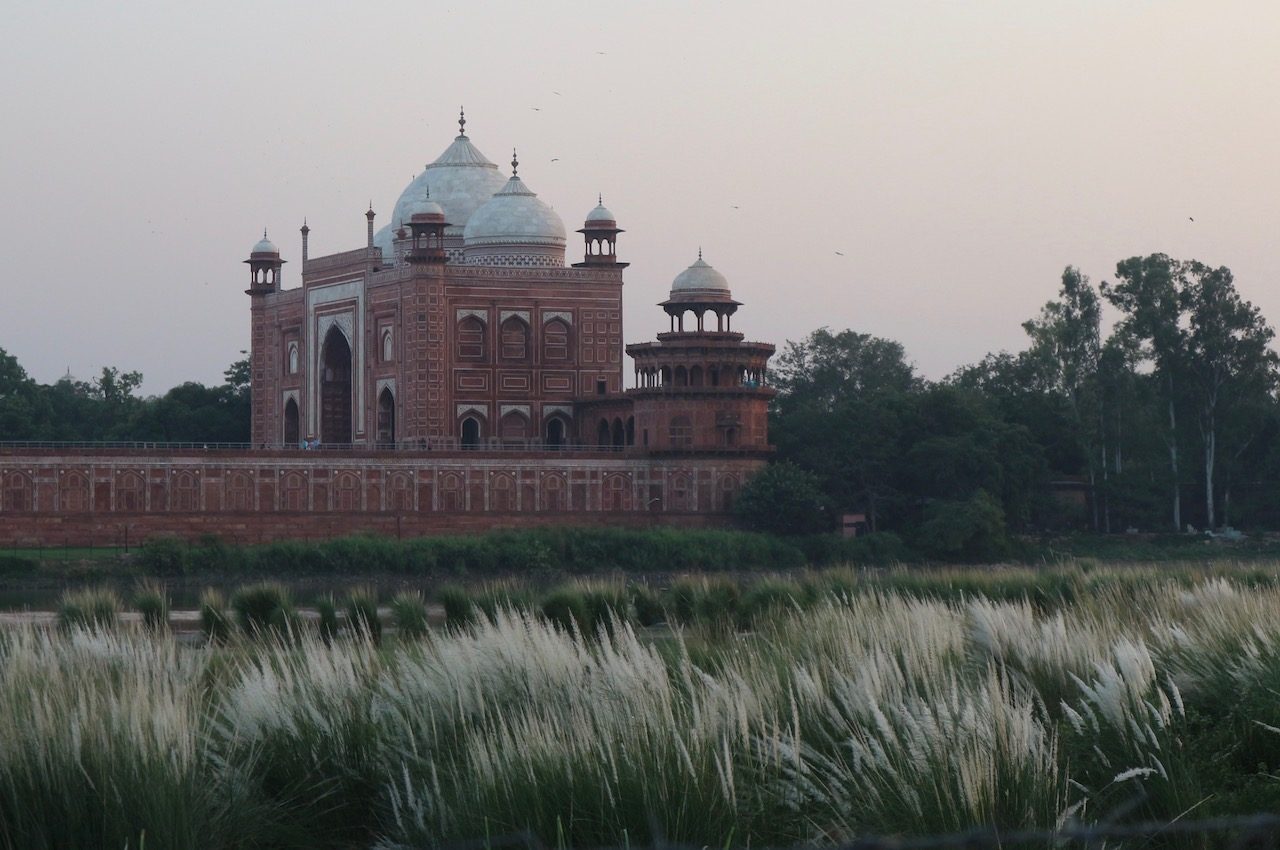 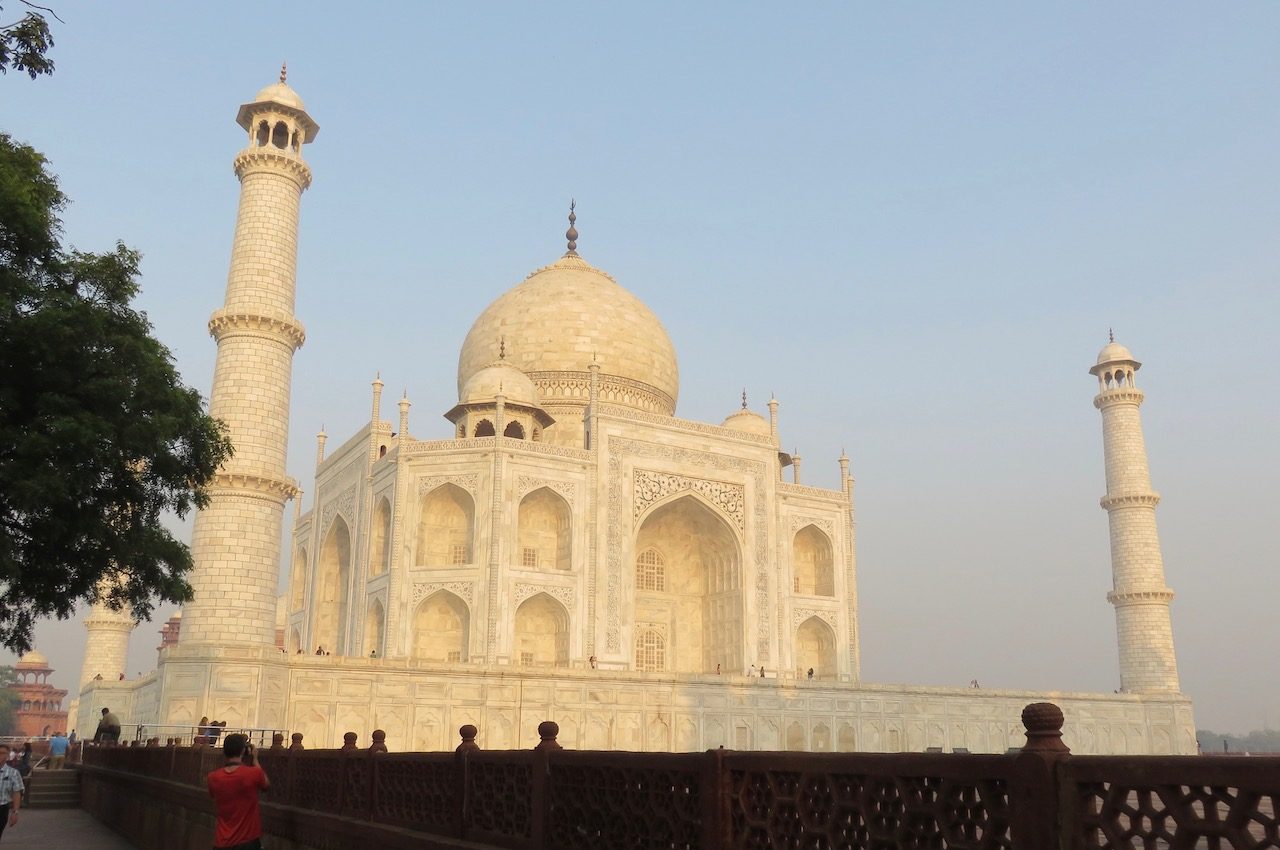 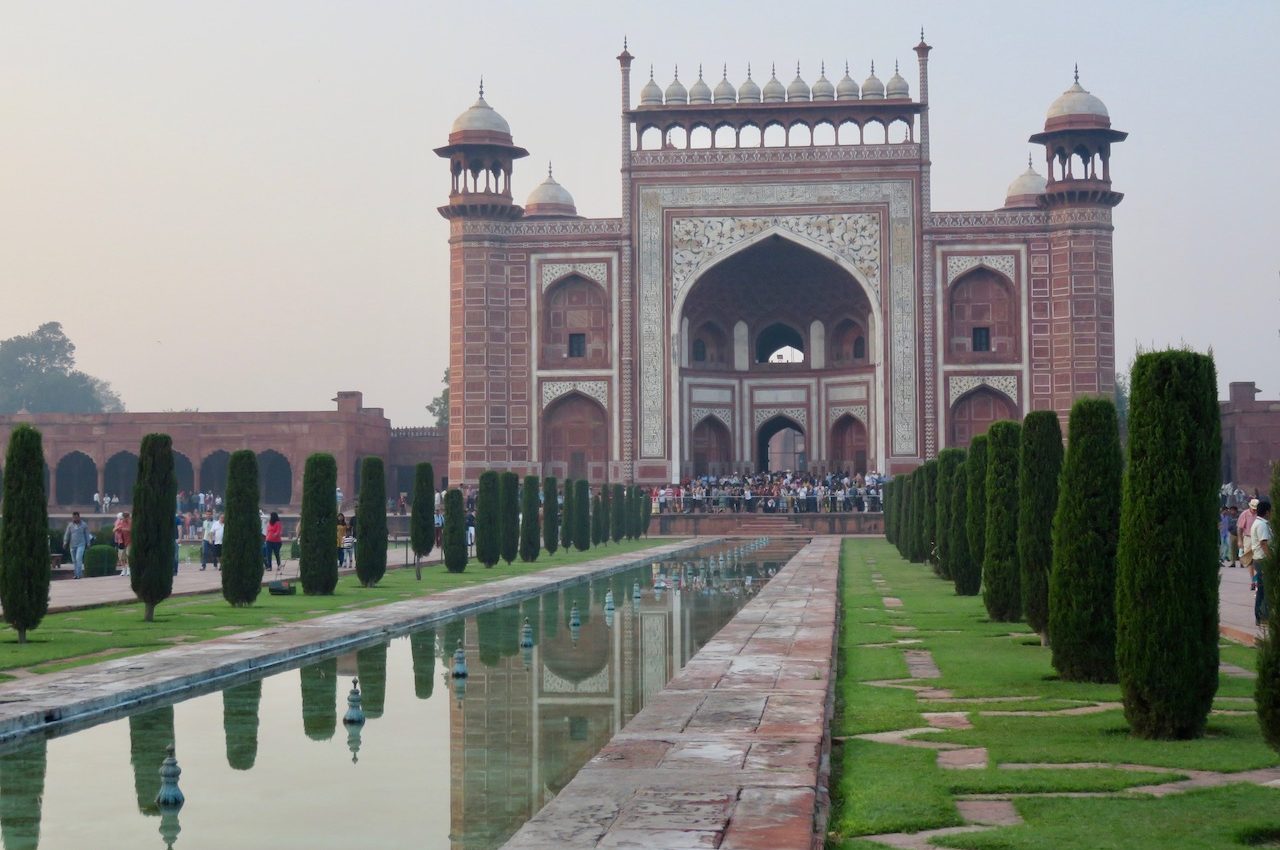 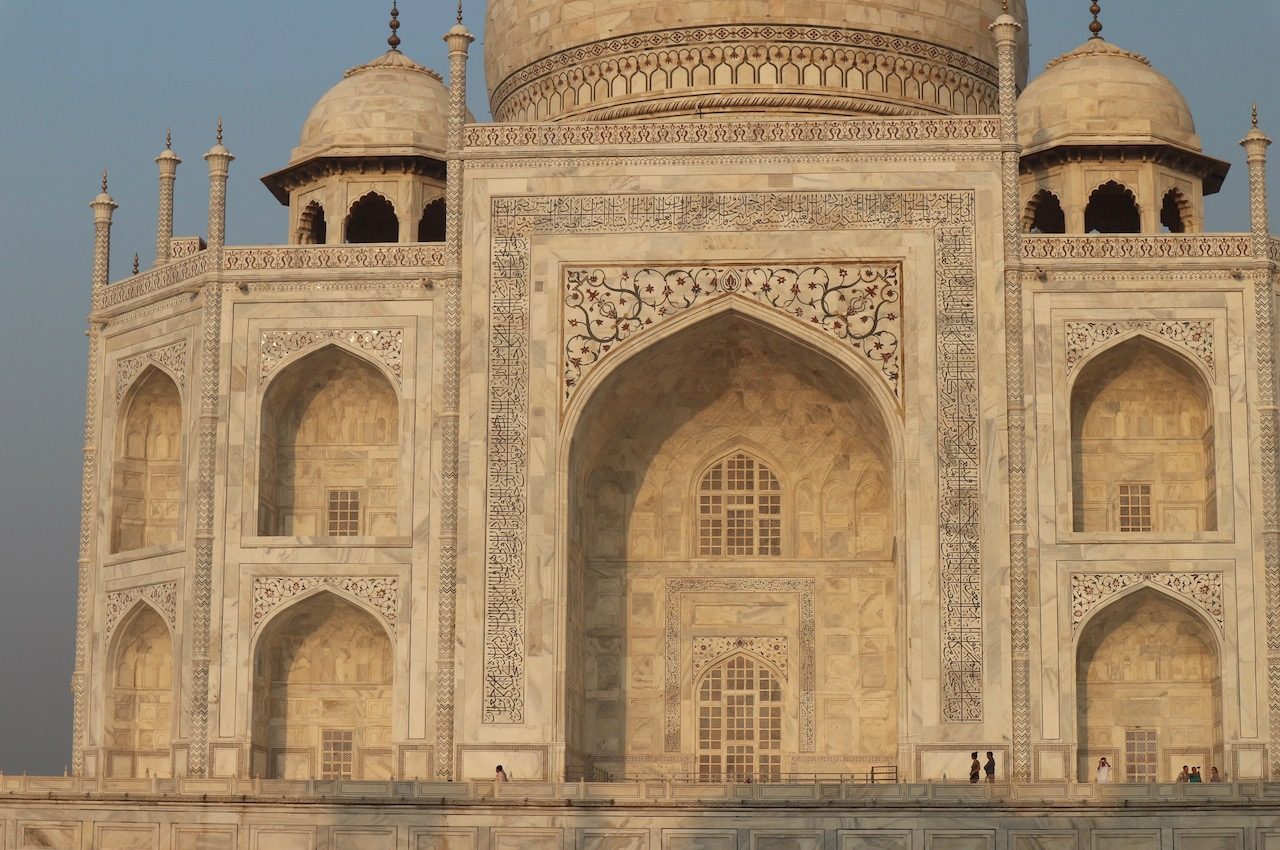 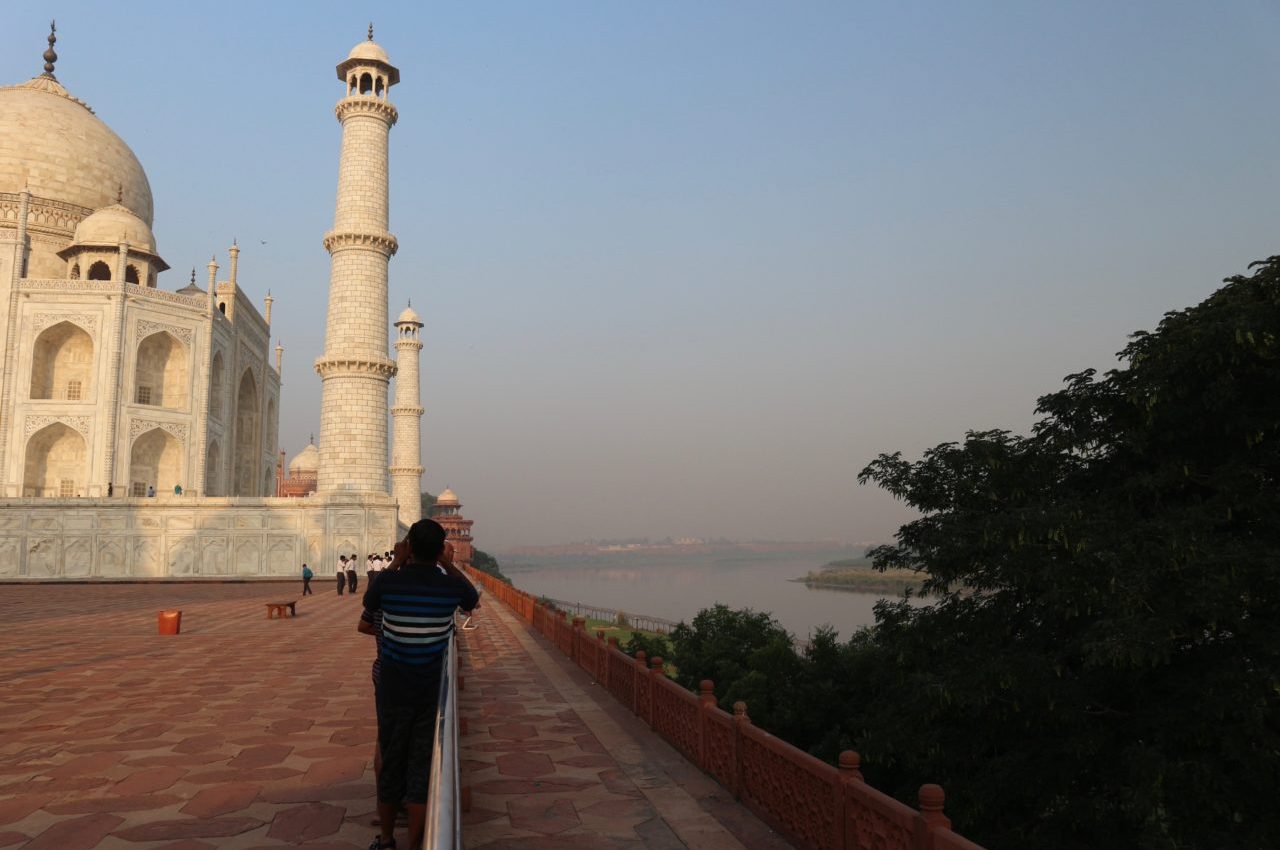 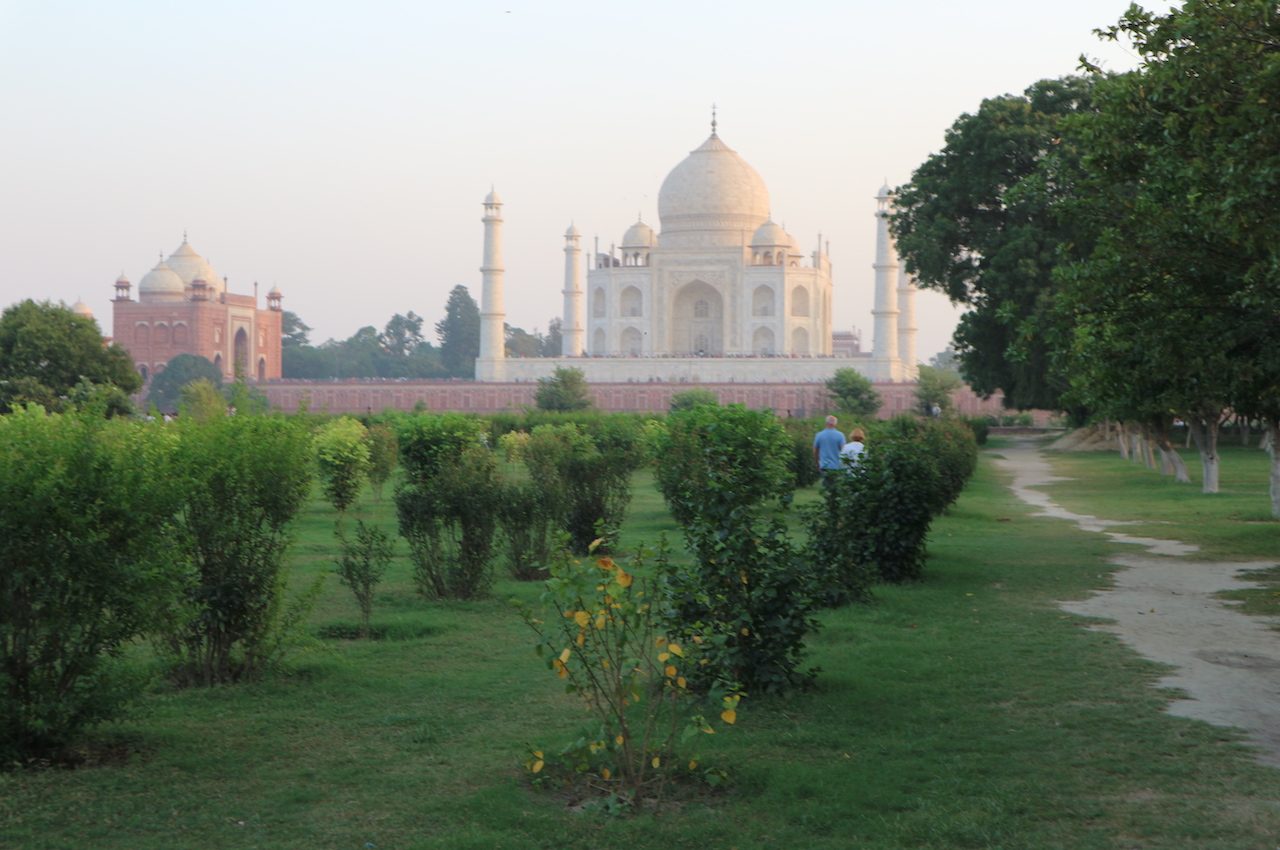 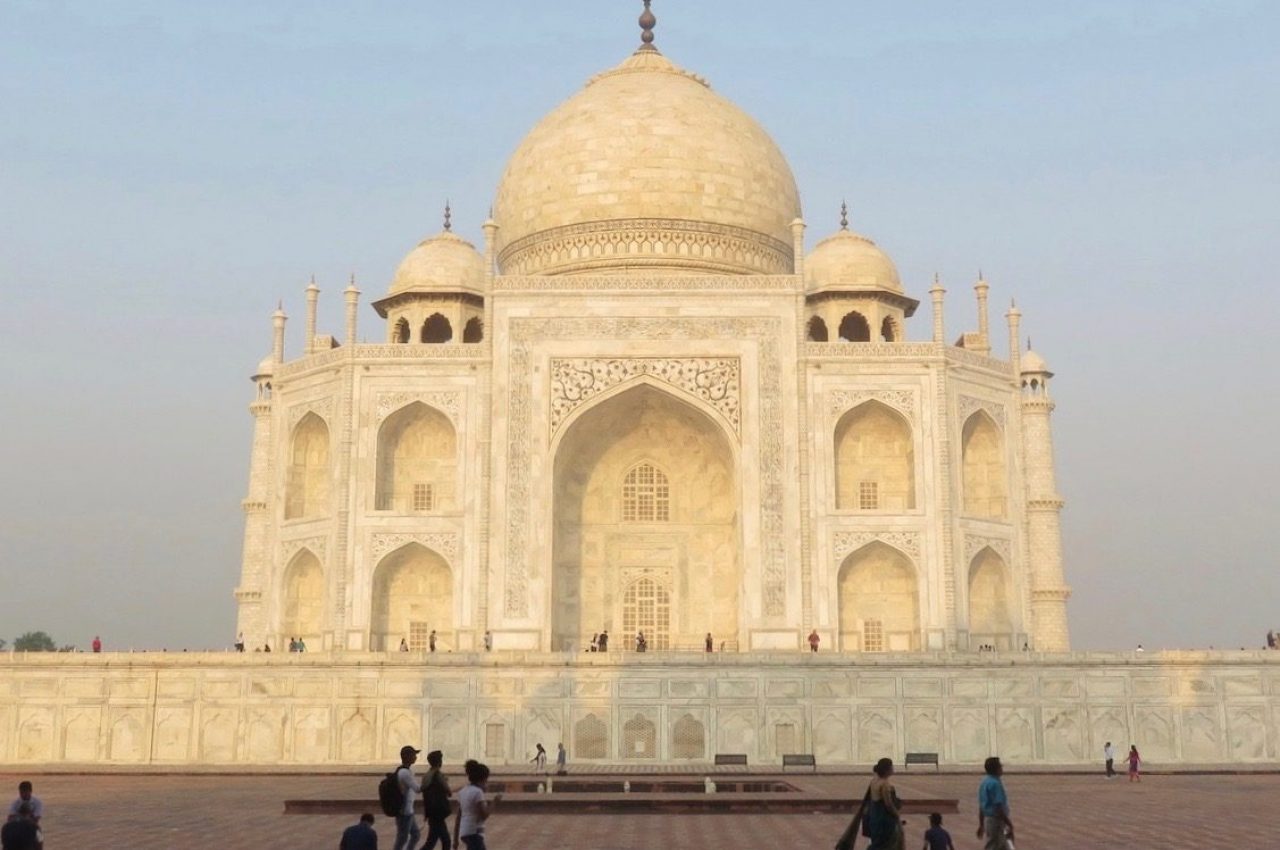 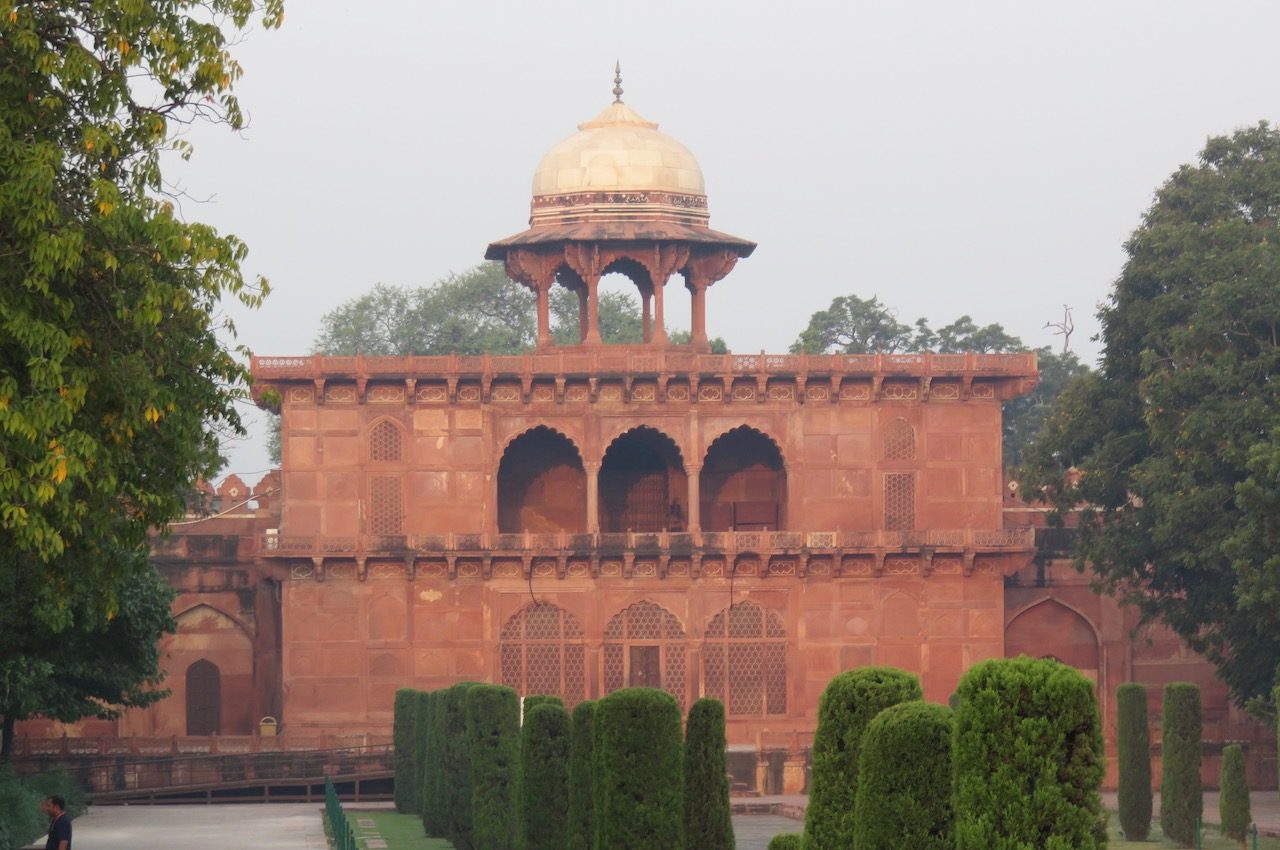 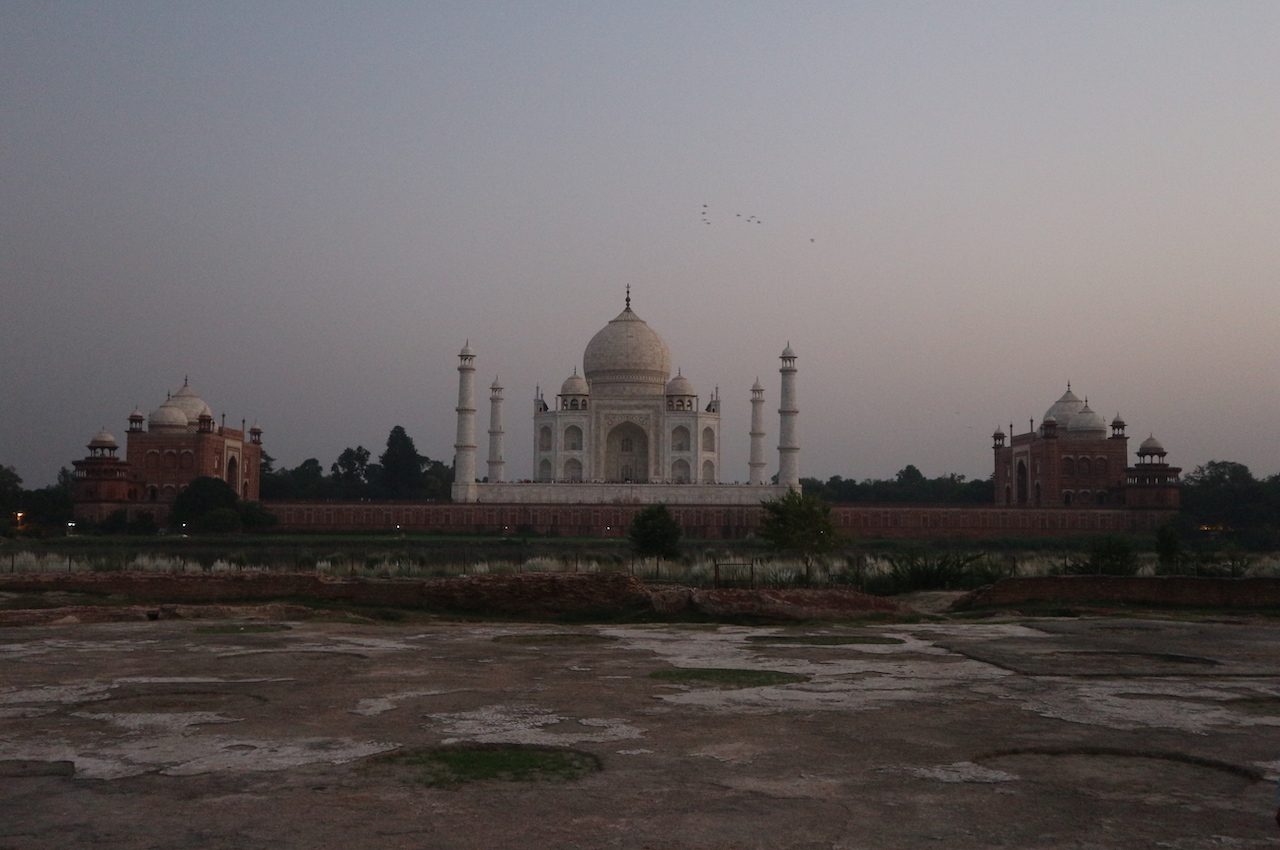 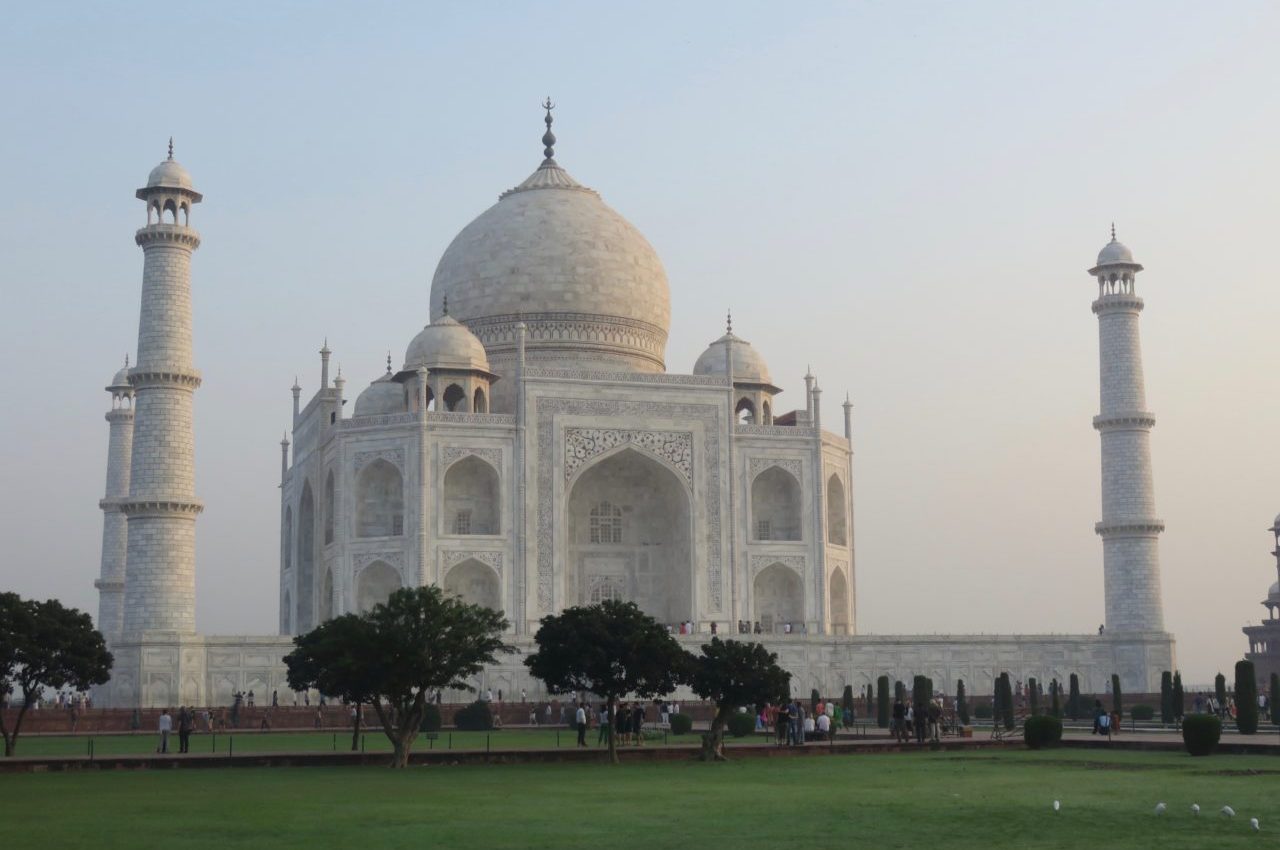 "Pics or it didn’t happen!": Why Your Holiday Shouldn't Be A Series Of Curated Instagram Shots
Explore
1