Dotted across the landscape of Japan are dozens of breathtaking temples and shrines, each unique in their own special way. Reminiscent of a time long past, each footstep into the temple and shrine will leave you mesmerised with their beauty and superb craftmanship.

If you need more reasons to travel to Japan, simply look through our careful curation of Japanese Temples.

For a better viewing experience, you can view each temple individually in our collection here. (You can also navigate by using your left/right keyboard keys or swiping left/right on mobile) 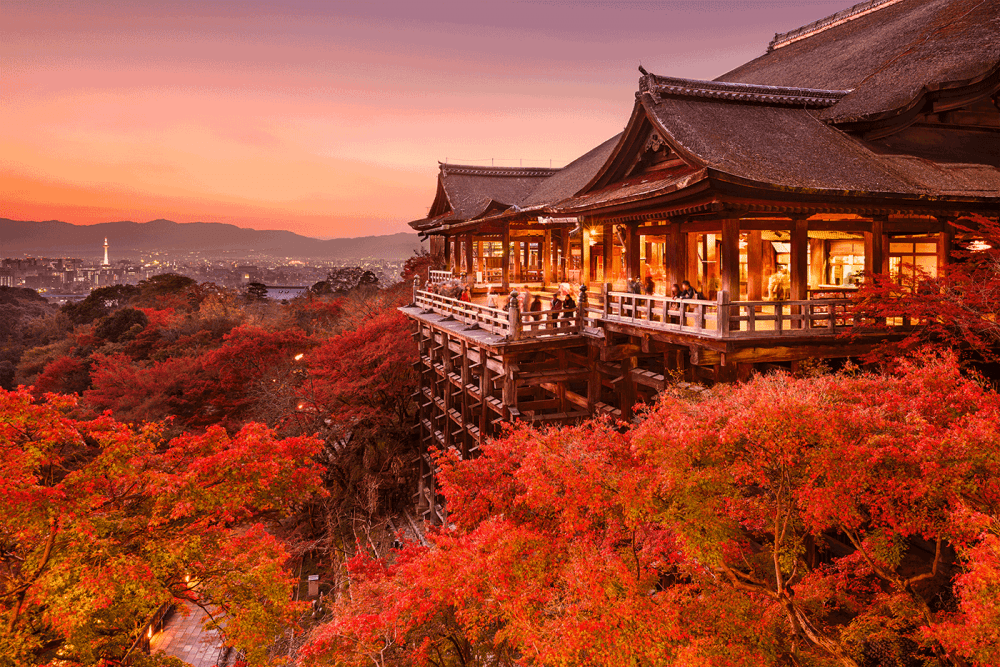 Taking its name from the waterfall within its complex (Kiyomizu means pure water), the Kiyomizu-dera Temple is located in East Kyoto and founded in the early Heian period in 778 AD by Shogun Sakanoue no Tamuramaro, with its present buildings constructed in 1633 on orders of Tokugawa Iemitsu. Included as one of the Historic Monuments of Ancient Kyoto UNESCO World Heritage sites, one amazing fact about the temple was that it was constructed without a single nail used in the entire structure. 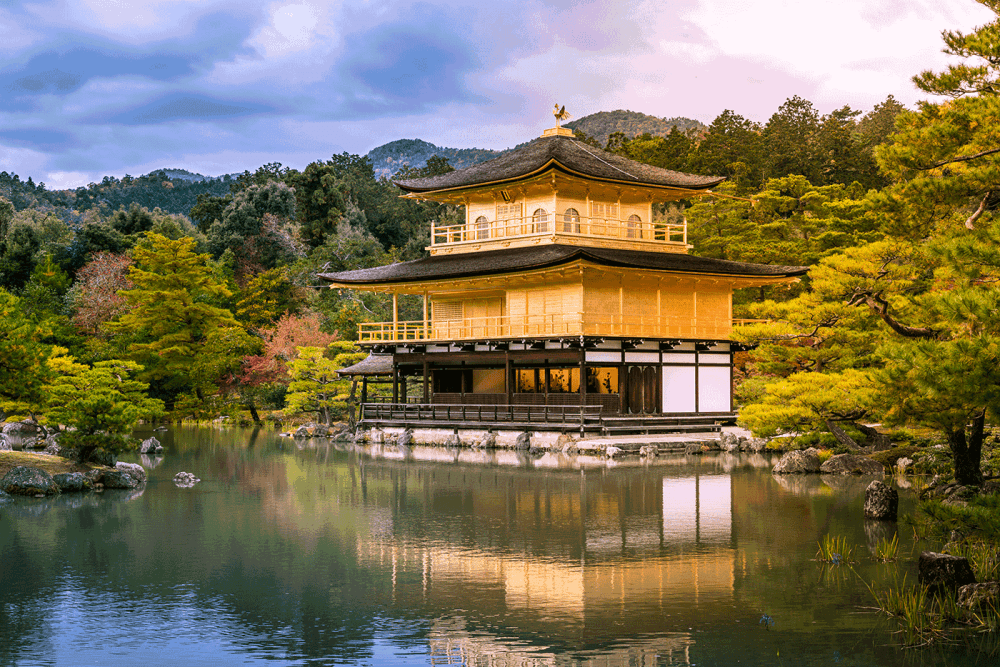 Dating back to 1397, Kinkakuji (Golden Pavilion) is a literal golden pavilion whose top two floors are completely adorned with gold leaf, making it stand out as one of the most famous temples in Japan drawing massive crowds annually. Interesting enough, gold was used as it was seen as a symbol to mitigate and purify any pollution or negative thoughts and feelings toward death. 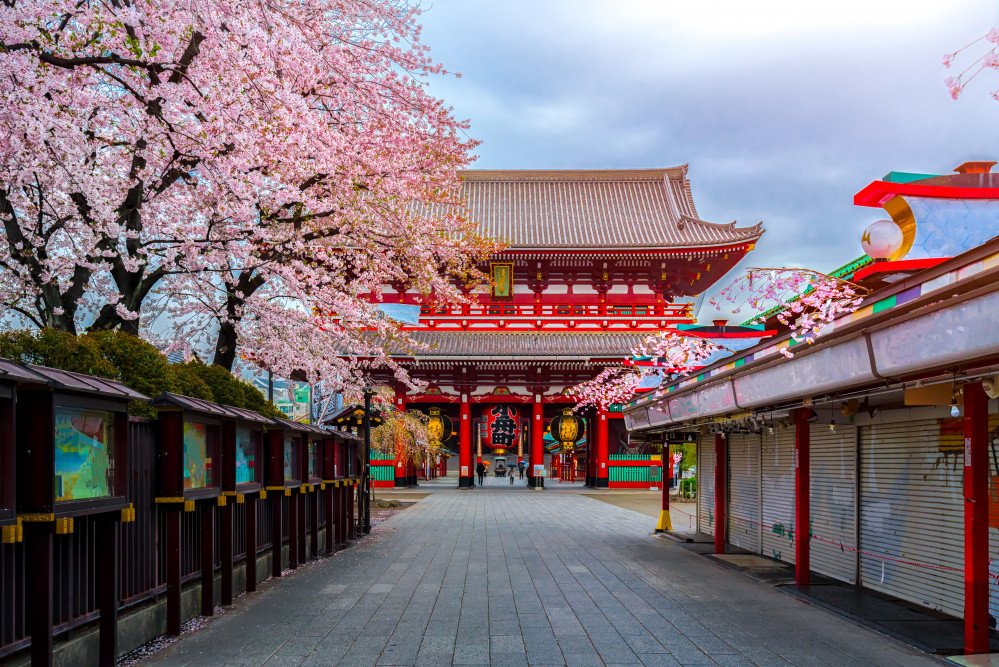 Founded in 645 AD and dedicated to the Bodhisattva Kannon (the Goddess of Mercy), the Sensoji-ji Temple is the oldest temple in Tokyo and one of its most significant. According to legend, two fishermen found a statue of the Goddess in the Sumida river and their village chief recognised its sanctity and enshrined it by remodeling his house into a small temple in Asakusa for the villagers to worship it. With many shrines adjacent to it, the temple is the most widely visited spiritual site in the world with over 30 million visitors annually. 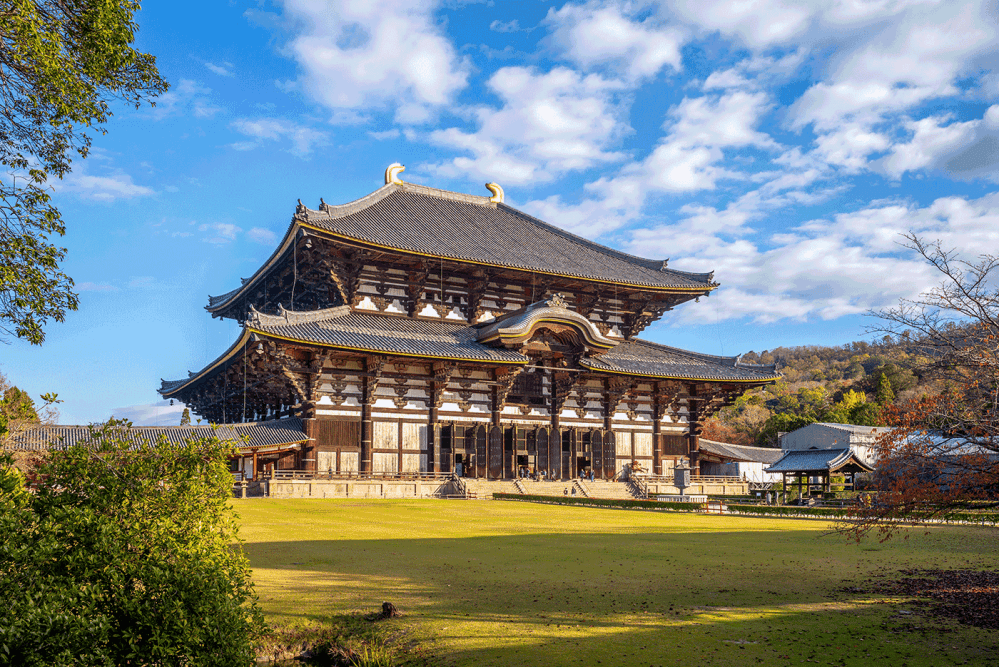 Famed for its Great Buddha Hall, the world's largest wooden building that also houses the world's largest bronze statue of the Buddha, the Todai-ji Temple or Eastern Great Temple is a historic landmark of Nara ever since its construction in 752 AD. As the head temple of all provincial temples in Japan, it played a pivotal role in the country and was once so powerful that the capital was moved from Nara to Nagaoka to lower the temple's influence. 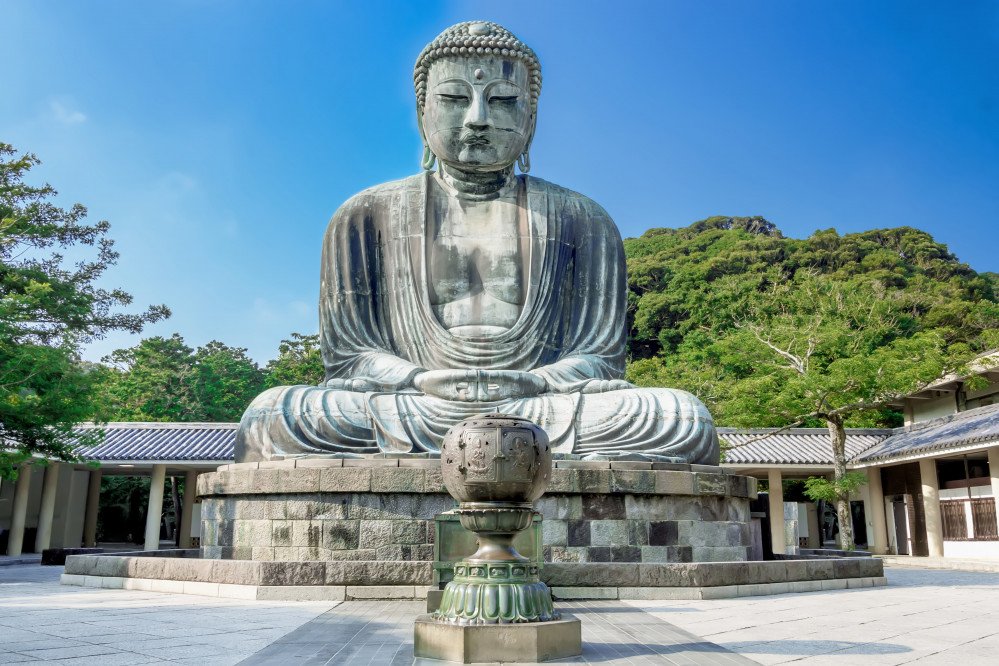 The Kotoku-in Temple is a Jodo-shu Buddhist Temple in the city of Kamakura most renowned for its Great Buddha bronze statue which resides outdoors in the open air, an unusual sight amongst other large buddha statues in Japan. The Great Buddha bronze statue was preceded by a giant wooden Buddha completed in 1243 AD after 10 years of continuous labour and today it is regarded as one of the national treasures of Japan. 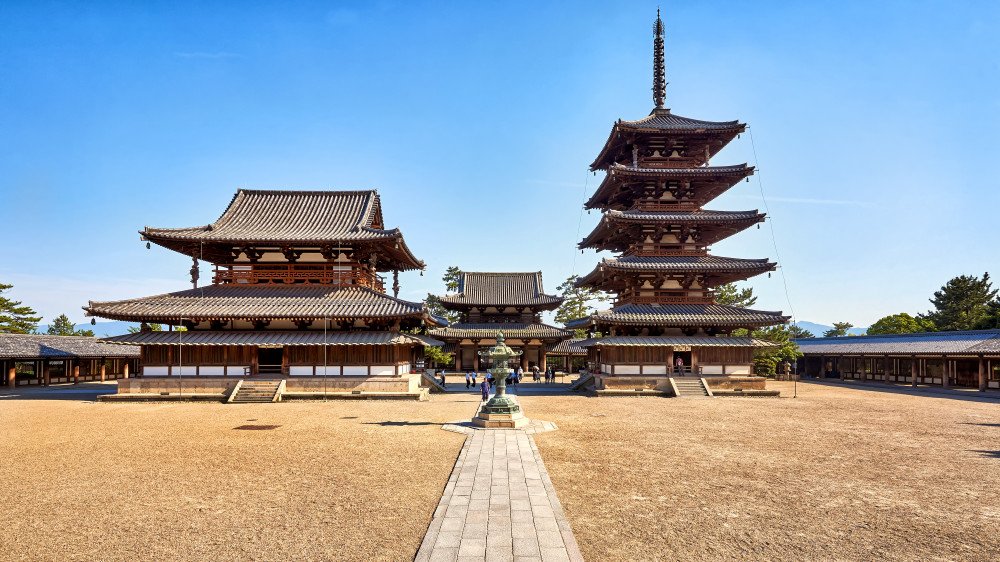 The Horyu-ji Temple grounds is one of Japan's oldest temples and also home to some of the oldest wooden buildings in the world built sometime in the Asuka period (538 - 710). What makes them even more remarkable is that they have not been destroyed once in this period spanning more than a thousand years, although they have been renovated many times over the years. 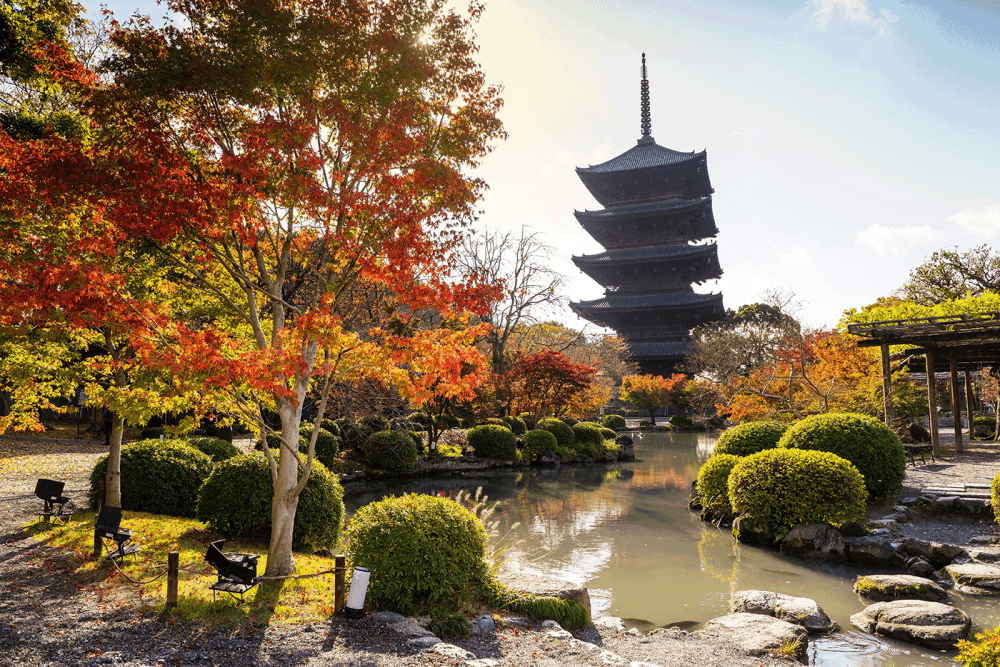 Founded in the early Heian period from 796 AD, the To-ji Temple is all that remains of a pair of temples that once guarded the Rashomon Gate into Kyoto. Its most famous sight is its five-storied pagoda which stands 54.8 meters (180 feet) high as the tallest wooden tower in Japan. The temple is also designated as UNESCO World Heritage Site because of its historical and spiritual significance. 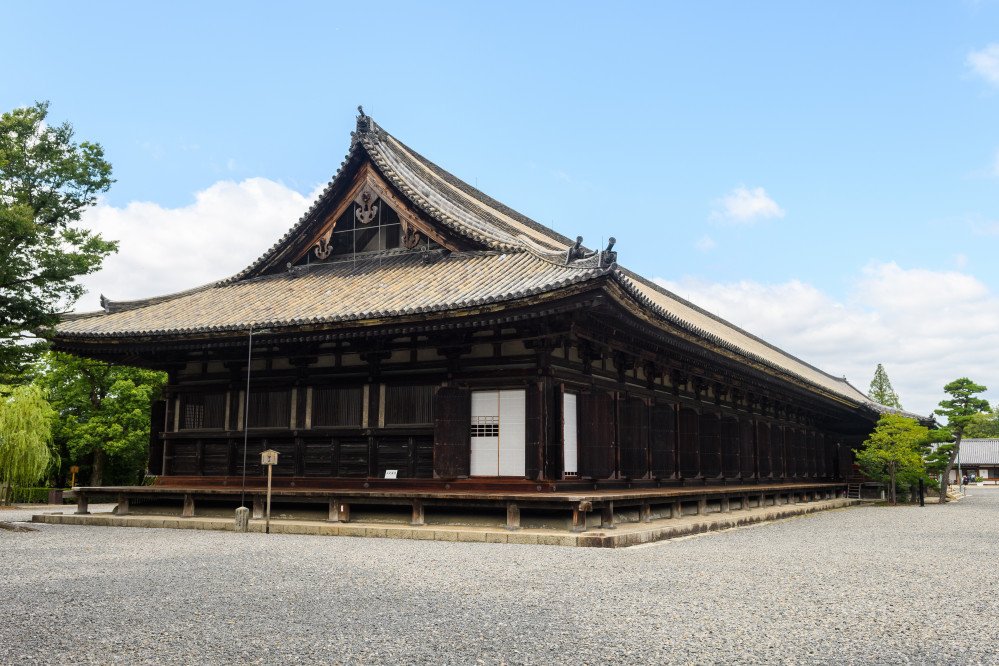 The temple is primarily famous for its 1001 statues of Kannon, the Goddess of Mercy, in her thousand-armed incarnation across the entire 120m length of the temple. Japan's longest wooden structure, the name Sanjusangendo (literally 33 intervals) is derived from the number of intervals between the building's support columns. The hall also displays 28 guardian deities, with roots in Hinduism, whose purpose is to protect the Goddess Kannon. 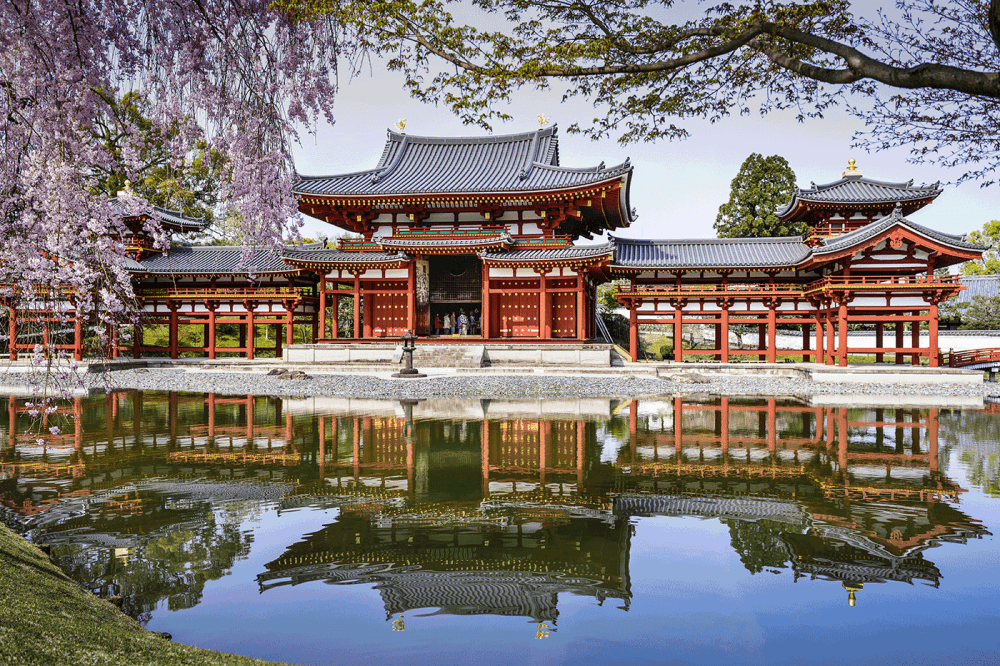 Originally built during the Heian period as a countryside villa for the Minister of the Left, it was converted into a temple following the high-ranking courtier's death. The most famous building in the temple is the Phoenix Hall, nicknamed as such because of its shape and the two Phoenix statues on its roof. Fun fact: The hall is featured on the back of the Japanese ten yen coin. 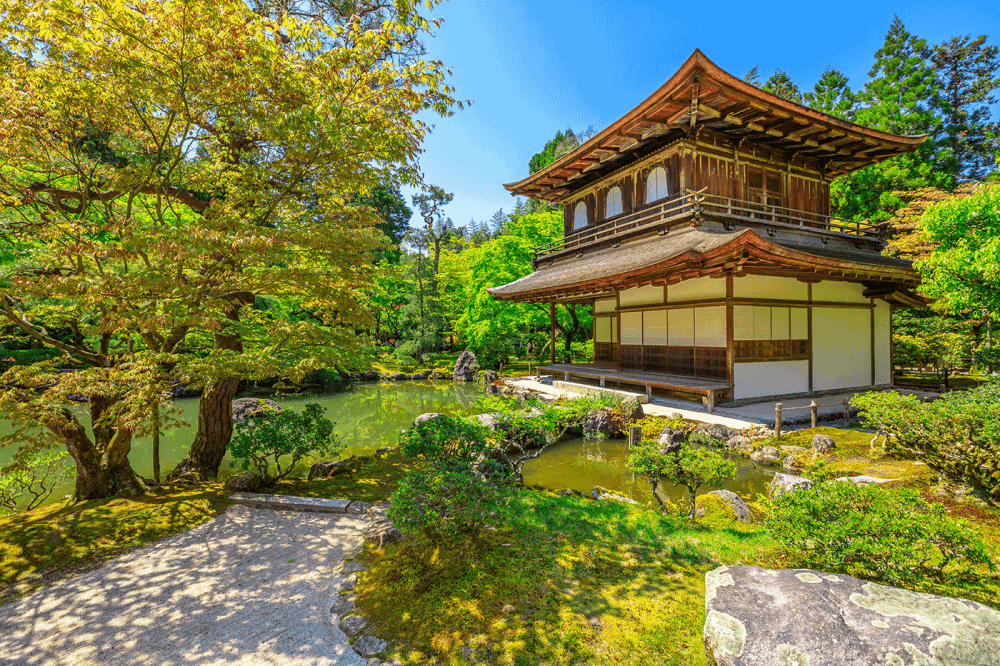 Ginkaku-ji Temple, or the Silver Pavilion, is a Buddhist Zen Temple known for its magnificent halls and beautiful gardens. The retirement villa of art obsessed Shogun Ashikaga Yoshimasa who supported the development of many artists, poets and nobles in their art, Ginkaku-ji became a center of contemporary culture, known as Higashiyama Culture, which had a far-reaching impact on the entire country. Such arts also include the tea ceremony, flower arrangement, noh theater and garden design. 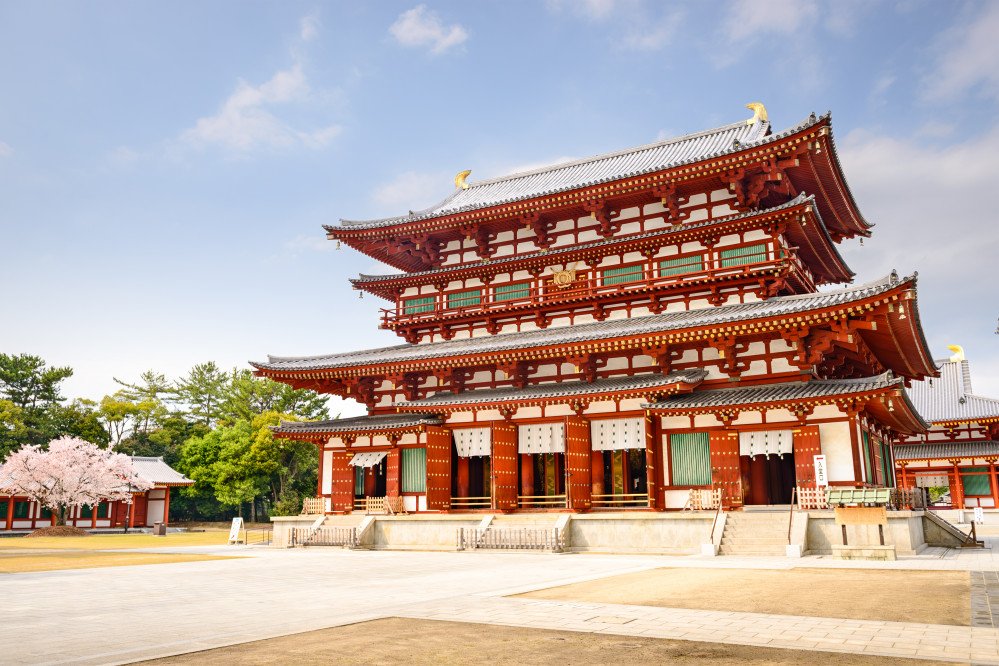 Yakushi-ji Temple is one of the most famous imperial and ancient Buddhist Temples in Japan, designated as a UNESCO World Heritage site under the "Historic Monuments of Ancient Nara". Commissioned by Emperor Tenmu during the Asuka period in 680 AD, it was built to pray for the recovery of his consort who was suffering from an illness. Interestingly, this act of building temples in devotion to Buddhist figures was commonplace among Japanese nobility in the early years when Buddhism first spread from China and Korea. 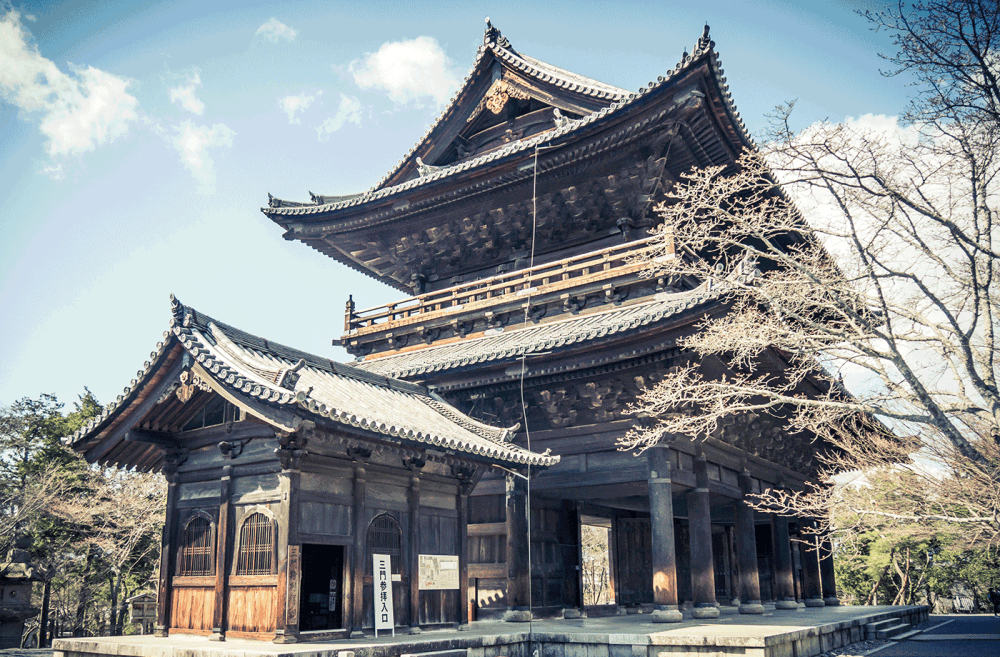 In the midst of nature and surrounded by lush green hills, Nanzen-ji Temple has an almost mystical feel about it. Dating back to the mid 13th century as the head temple of one of the schools within the Rinzai sect of Japanese Zen Buddhism, it holds historic and spiritual significance as one of the most important Zen temples in Japan today.

Lois Crawford
129
0
Travel Hacks
From small scams to ripoffs and things to be very cautious about..

Abigail Pena
193
0
Travel
Every time you travel, you not only step out of your comfort zone and learn more about the world but also about yourself - lessons that could are arguably more beneficial than any lesson taught in the classroom or from...

Aubree Myers
141
0
Travel
It could be anywhere in the world!

Living a Life of Travel: An Interview with Jessica and Laurence Norah
Explore
1
We use cookies to collect and analyse information on site performance and usage, and to enhance and customise content and advertisements. By using our site, you consent to our privacy policy and use of cookies. Learn more.