Marseille is the second-largest city of France, its main commercial port and the most significant city of the historical province of Provence. Marseille was originally founded circa 600 BC as the Greek colony of Massalia and became the preeminent Greek polis in the region of southern Gaul. As a big trading center and the gate of France to Africa and the East, it has always been a city with unique culture being the crossroad of many civilizations. French, Italians, Armenians, Jewish and North Africans, all have participated in their own way to the mutli-ethnic identity and the vibe of the city. Marseille is a city where rich and poor neighbourhoods co-exist side by side and for many years was notorious for criminality and undevelopment. However since 2013, when the city was European Capital of Culture, it has begun to change and now it is a lively city which respects its traditions and way of life. The heart of the city beats around Le Vieux Port (Old Port), which is and the main touristic area.

Here are the reasons why you will love this city from the moment you arrived : 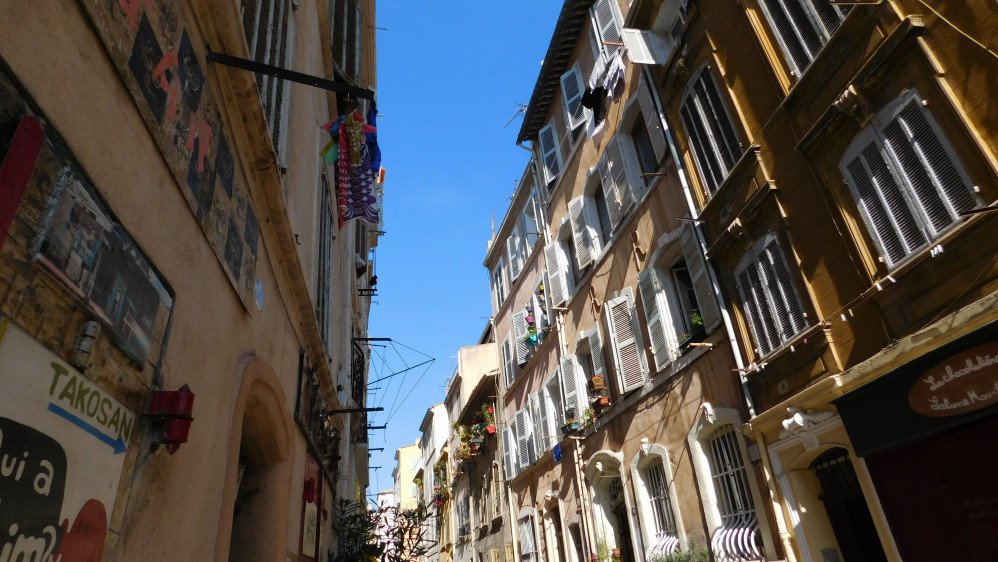 1. Le Panier : This was the site first settled by Greeks and has always been the area where the new immigrants found shelter. The Panier (meaning the basket) was expanding until the Second World War, when large parts were destroyed by the Nazis in a plan to deal with the criminals and Resistance fighters, who were hidden in its maze of streets. Panier today is a multi-coloured and multi-ethnic neighborhood with a strong artistic character. The best way to explore Panier is on foot. There’ s something interesting in every street and it is also a great area for shopping for crafts, local goods and artist’s galleries. The highlights are : Le Vieille Charite, a wonderful baroque building which was established as a poorhouse (now a museum and cultural centre), the Maison de La Boule, a museum and shop dedicated to the traditional game of boules (aka petanque) and also the laid back Place De Lenche with many cafes and amazing view to the port. 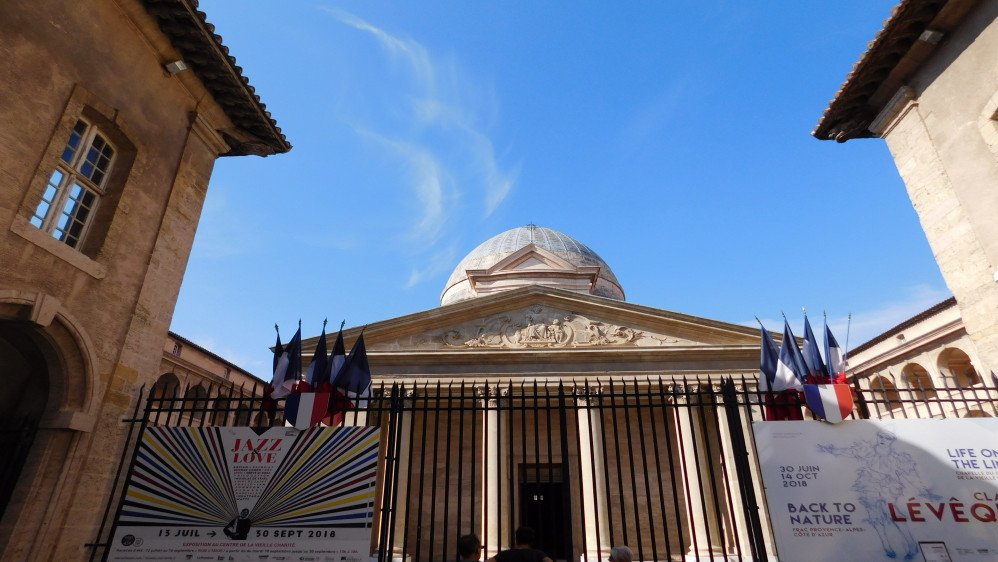 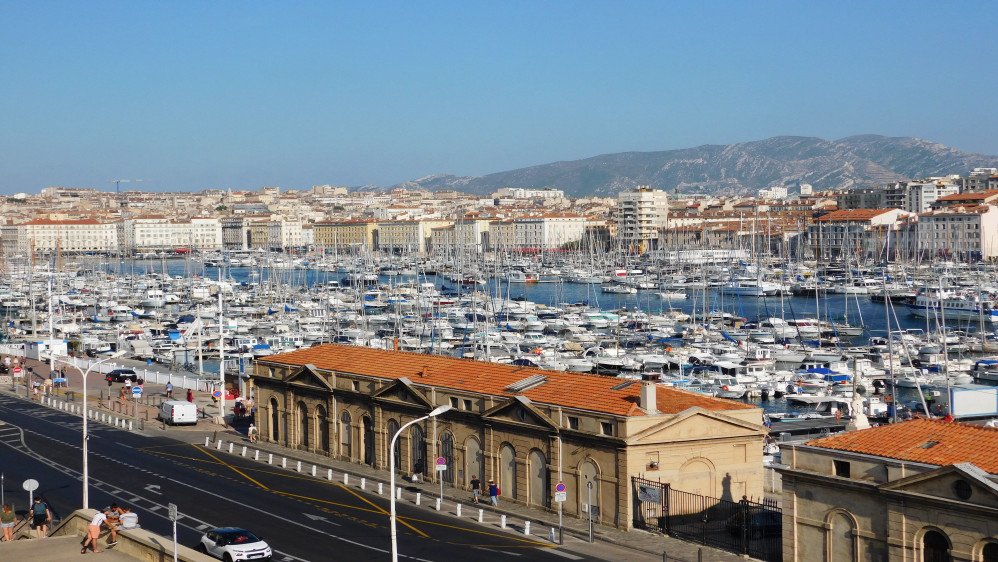 2. Le Vieux Port (Old Port) : The Old Port, mast-to-mast with yachts and pleasure boats is the epicenter of the whole area. The promenades are lined with numerous cafes, restaurants and bars, while Quai des Belges, during the summer evenings, is full of street performers, artists and hundreds of people walking leisurely. During your walk along the port, you should visit the garden of the Musee d’ Historie de Marseille (on Rue Henri Barbusse), where you can see the ruins of the ancient docks built by the Greeks. Finally at the north end of the port, you will meet the magnificent boulevard Canabiere, with impessive buildings and many shops, which was the center of the artistic and commercial life of the city during the 19th and early 20th century. 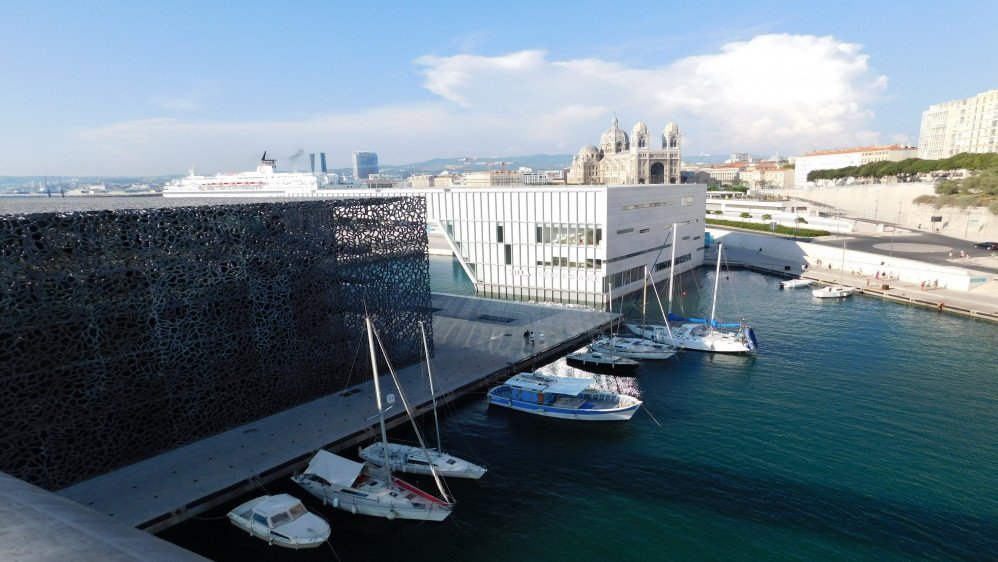 3. Mucem and Fort Saint-Jean : Mucem (aka Musee des Civilasations de l’ Europe et de la Mediterranee) was founded in 2013, when the city was the European Capital of Culture and is dedicated to the civilizations of the Mediterranean Sea (for info and tickets visit the official site). The museum is located at the entrance of the harbour, opposite of the Joliette neighborhood and Cathedrale de la Mayor. Although its exchibits are very interesting, more impressive is the building itself. The museum built “by stone, water and wind” by architects Rudy Ricciotti and Roland Carta is a cube of 15.000 m2 surrounded by a innovative latticework shell of concrete. A suspended above the sea pedestrian passage connects the terrace of the museum (where a cafe-restaurant is located) with Fort Saint-Jean. The fort, built in the 12th century, was first used as a monastery and castle of The Order of the Knights of St John, who were commissioned with the protection of the harbour. During the French Revolution the monks were expelled and the fort became a prison. Nowdays several parts, like the church, the hospital and the command station, have been restored and the fort, as a part of Mucem, is a great place for a walk. The view from both the fort and the terrace of Mucem is magnificent, especially if you come here at sunset (the fort during summer is open until 20:00). 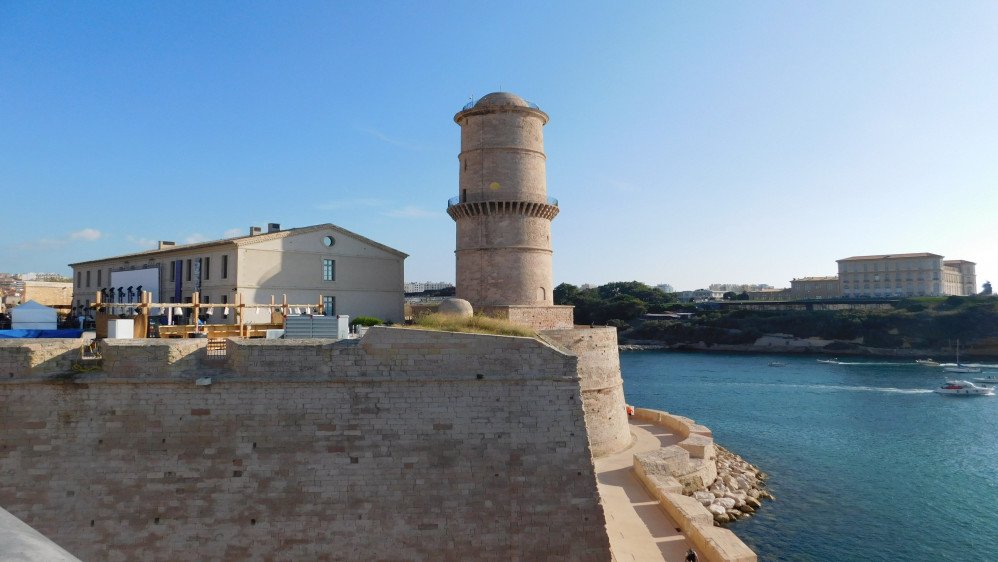 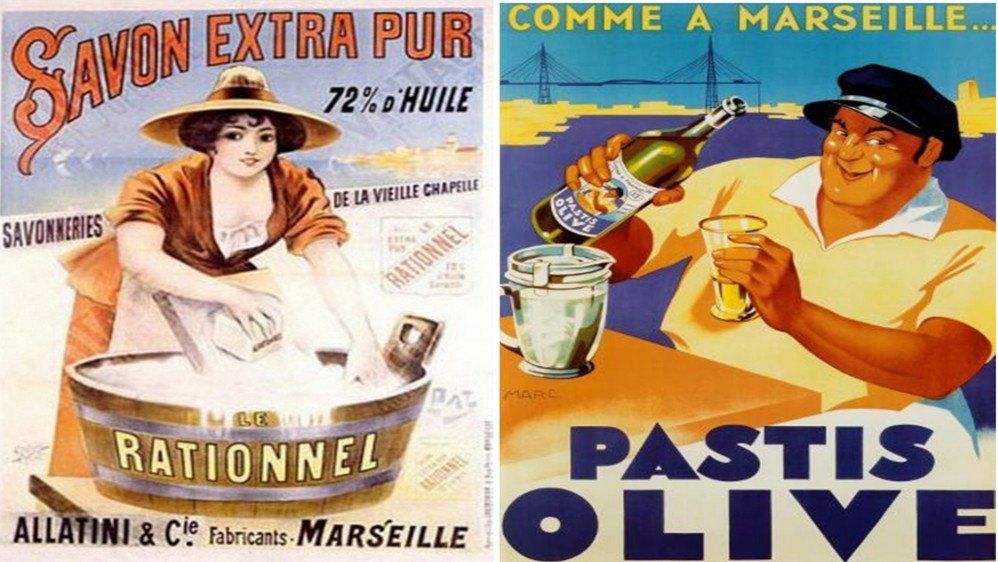 4. Savon and Pastis : Marseille is a very good shopping destination, with open markets, shopping malls and commercial avenues. But you cannot leave Marseille without buying its two most famous products : savon (soap) and pastis. Savon de Marseille is a world famous traditional hard soap made by mixing seawater, vegetable oil and alkaline ash from sea plants, and has been produced here for over six hundred years. The first documented soapmaker was recorded there about 1370. By 1688, Louis XIV introduced regulations limiting the use of the name Savon de Marseille to olive oil based soaps. The law has since been amended to allow other vegetable oils to be used. During the first half of the 20th century the companies to produced soap were 132 but nowdays only 5 survive. During your walk around the Old Port you could buy excellent traditional soaps at La Grande Savonnerie (1 Rue Henri Fiocca) and Savonnerie Marseillaise de la Licorne (240 Quai du Port). On the other hand, pastis is an anise-flavoured spirit and aperitif typically containing less than 100 g/l sugar and 40–45% alcohol. The name “pastis” comes from the Occitan word which means “mash-up”. It was first commercialized in 1932 and became extremely popular in Marseille and Southeastern France after the ban of absinthe. Pastis is part of the tradition of Mediterranean anise liquors like ouzo, raki and sambuka. The best place to taste and buy pastis is no other than La Maison Du Pastis (108 Quai du Port). 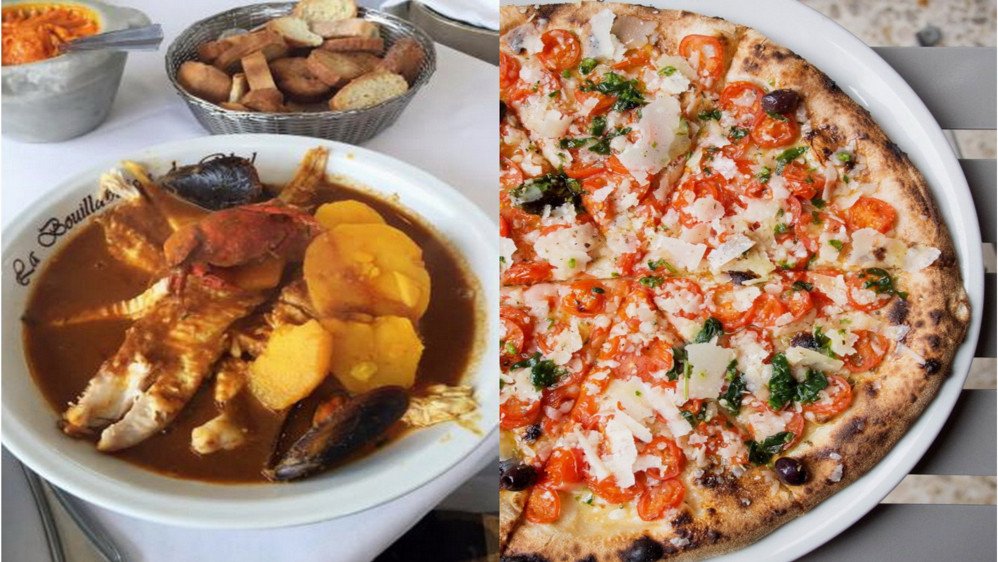 5. Boullabaisse or Pizza : The city offers a good variety of restaurants to please all tastes. But the majority comes here to taste the famous boullabaisse. Boullabaisse was originally the stew made by Marseille fishermen using the bonny rockfish, which they couldn’ t sell. Apart from the various kind of fish, the stew could include shellfish, urchins, mussels, crab and octopus. Vegetables such as onions, tomatoes, celery and potatoes are cooked together and served with the fish. What makes this soup different are the Provencal herbs and spices, that rise the taste to another level. Although tasting this unique soup is no longer a cheap treat (40 to 60 euros per person), our favourite places to taste it and avoid any tourist traps are : Chez Madie les Galinettes (138 Quai du Port) and Chez Fonfon (140 Rue du Vallon des Auffes). But Marseille has also a another unexpected famous treat, which is pizza. Due to the proximity with Italy and the huge flow of Italians immigrants the previous centuries, the city has a strong Italian tradition which is expessed (among other things) in its love for pizza. In Marseille you will probably taste the best pizza in France. The pizza here is made with a crispy airy dough, tomato sauce on top and real Italian cheese. Every Marseille resident has its favourite spot for pizza. Our favourite ones are : Chez Sauveur (10 Rue d’Aubagne) and La Bonne Mere (16 Rue Fort du Sanctuaire). 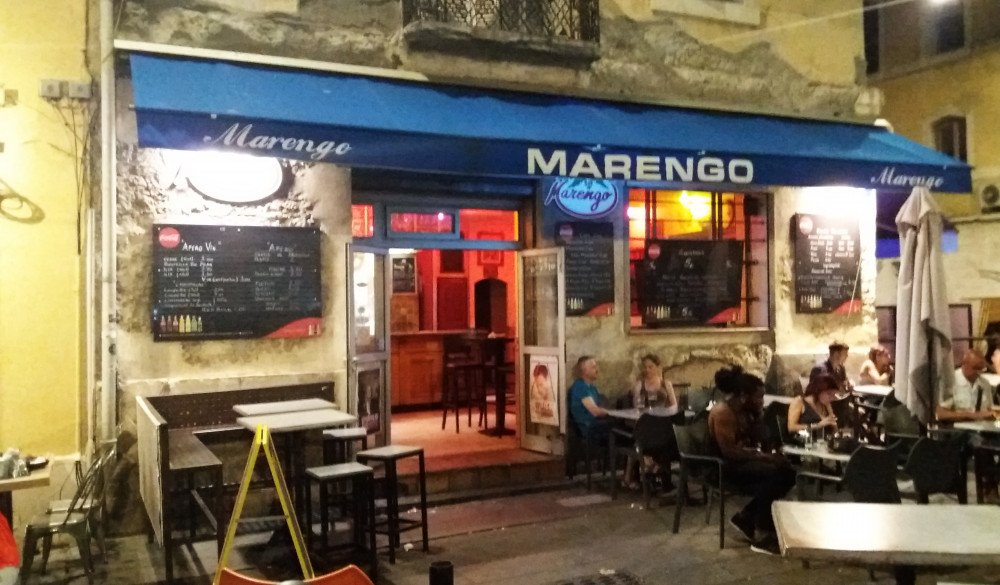 6. Marseille at night : In order to feel the atmosphere of the city, you should have a beer or a drink in one of the bars on the streets around the Old Port. In Cours Honore d’ Estienne, Quai des Belges, Cours Jean Ballard and many more, when the sun sets and the night comes, the city is transformed to the traditional harbour it used to be. The authentic and genuine air of strong nautical tradition is evident and you feel that coming across Conte Montecristo is possible in every corner. At once you have the feeling that you are at home and you are becoming part of this melting pot of nations, cultures and civilizations. You have to live it, you cannot describe it. 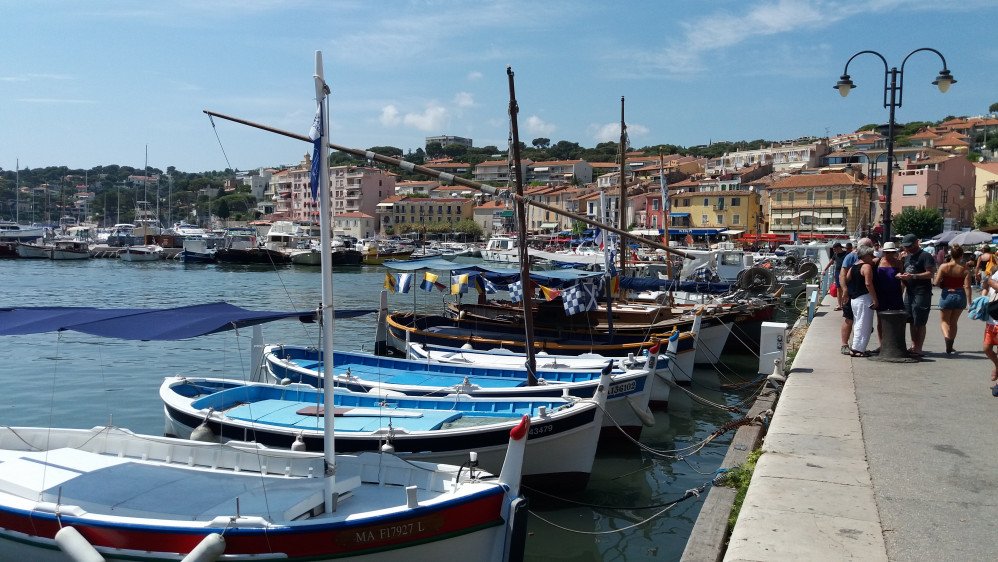 7. Cassis : With wonderful blue waters, pastel coloured houses, cobbled streets, irreristable charm and just 30 klm from Marseille, this seaside town is popular with tourists and French holidaymakers. Excellent local food, welcoming inhabitants and characteristic architecture have made this is a famous resort since the early 20th century. There are several beaches inside and near the town but for a true unique experience, board to one of the numerous boats that leave from the port, for a day trip to the nearby Calanques, a must-see natural wonder. The Calanques are essentially inlets that have been formed in the limestone cliffs, leaving behind a series of beautiful little bays. The clear turquoise waters in contrast with the pure white rocky cliffs, is a site you will carry with for a long time. Upon your return to Cassis do not forget to grab a ice cream cone with lavender flavour (a local speciality). 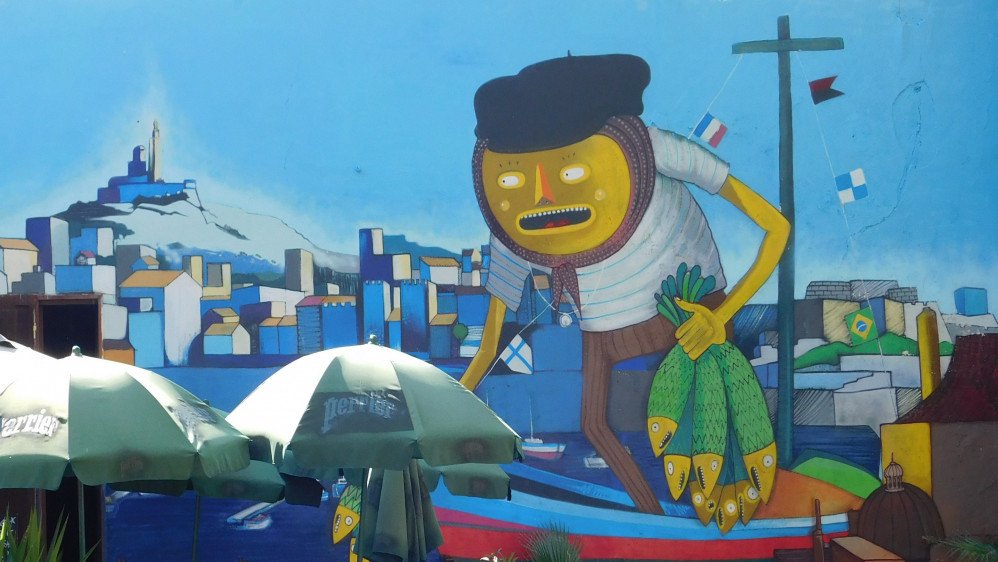 As an epilogue I believe that the above graffiti at a wall in Panier neighborhood, somehow manages to capture the true nature of the city. At the same time street art and high art, a fisherman and a mythic giant, welcoming and aggressive, warm colours and cold colours. A city you might never thought to visit, but if you did, your first thought will be when to come back again.

Abigail Pena
196
0
Travel
Every time you travel, you not only step out of your comfort zone and learn more about the world but also about yourself - lessons that could are arguably more beneficial than any lesson taught in the classroom or from...

Lois Crawford
130
0
Travel Hacks
From small scams to ripoffs and things to be very cautious about..

Aubree Myers
142
0
Travel
It could be anywhere in the world!

Top 4 Affordable Travel Destinations For This Summer
Explore
1
We use cookies to collect and analyse information on site performance and usage, and to enhance and customise content and advertisements. By using our site, you consent to our privacy policy and use of cookies. Learn more.