Interesting
Useful
In 2019 the readers of Conde Nast Traveller magazine voted Dresden as one the "Best Cities in World" and in fact put it in the second place. Risen from the ashes of World War II and neglected for many years, Dresden has made an impressive comeback as a beautifully restored city in the east of Germany. It reclaims its position in the elite of European capitals of arts, culture and architecture. Known as the "Florence on the Elbe", Dresden's major growth took place in the 18th century under the reign of August the Strong. Unfortunately, a few months before the end of WWII, on the night of 13-14 February 1945, the city became the target of one of most destructive air raids of all time, which destroyed the 75 per cent of the city. But the restoration of the historic sites and the rebuilding of residential areas have given the city special quality and unique atmosphere. The Elbe River divides Dresden in two parts. South of the river is the Old Town (Altstadt) with the historic center and in the north is the New Town (Neustadt).

The best time to take a walk around the historic center of the city is a spring or an autumn afternoon, when the light is soft and the traffic gradually calms down. Start your walk from Zwinger, one of the most important buildings of the Baroque period in Germany. It is a palatial complex with magnificent gardens. Augustus the Strong having returned from seeing Versailles, wanted to build something similar for himself. Primarily a party palace for royals, Zwinger has impressive portals that lead into a vast courtyard with fountains, framed by buildings lavishly adorned with sculptures. Walk around the courtyard and admire the elegance of the construction (the buildings house nowadays three very interesting museums).

Leave the courtyard through Glonkenspiel gateway, turn left and follow Sophienstrasse until you reach Theaterplatz. Although this is a replica of the original building, Semperoper (Semper Opera House) is a breathtaking building with a important artistic history. The building incorporates many stylistic elements from Renaissance and Baroque, while the Corinthian style pillars are typical of Greek classical revival. It first opened in 1841 and numerous operas premiered here, including Der Rosenkavalier by Richard Strauss. Only six sculptures survive from the original structure, which represent famous theatrical writers, like Sofocles and Shakespeare (tours are available only on rehearsal-and-performance-free days).

Cross Theaterplatz and reach Hofkirche. The Ehemalige Katholische Hofkirche (Former Court Cathedral) is an enormous 18th century basilica and the largest church in Saxony. The building is dominated by a 86 meters bell tower and it is decorated with numerous statues. Many kings and members of Saxony's royal families are buried in the crypt, as the heart of August the Strong, whose body lies in Krakow Cathedral (the church is open to the public on certain hours). From the church head east. First walk along the external buildings of Residenzschloss (Dresden Castle), which was the Royal Palace and the oldest building in Dresden. Today it is a museum complex with various collections. At the end of the road, turn right and continue walking along Augustusstrasse.

The south side of the street is paralleled by an immense mosaic covering one of the palace facades. Furstenzug (Procession of the Princes) is a detailed 102 meters long ceramic mural hand-painted onto 24.000 Meissen porcelain tiles (see here our related article about the town of Meissen). It pictures Saxon rulers from 1123 to 1904. It was originally painted between 1871 and 1876 to celebrate the 800th anniversary of the Wettin Dynasty, but in order to make the work weatherproof, it was replaced with porcelain tiles between 1904 and 1907. It is known as the largest porcelain artwork in the world and also a sight you won't meet in any other European country. 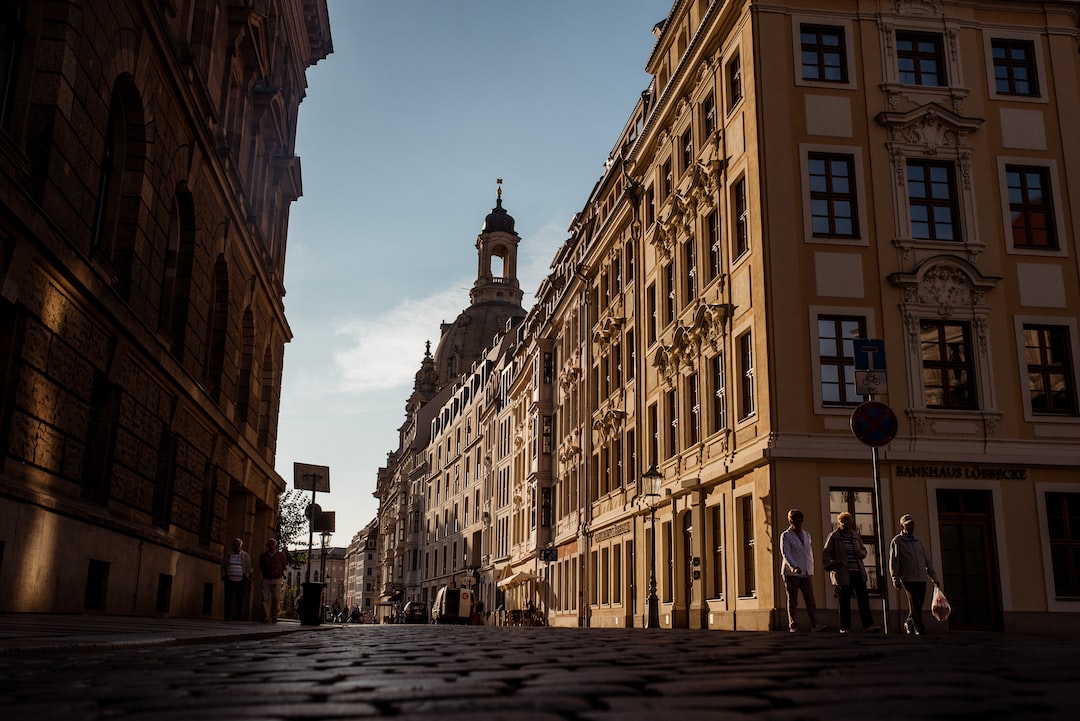 Photo by Tobias on Unsplash

Turn right and follow Augustusstrasse until Neumarkt square. Due to its location on a slight rise above Elbe River, Neumarkt was one of the first areas of Dresden's old city to be settled but was almost completely destroyed by the air raid during WWII. The square is dominated by the spectacular Frauenkirche (Church of Our Lady) [photo at the top]. Built during 18th century, this Dresden landmark was left to ruins for decades. After Germany's reunification, funds were raised around the world to finance the resurrection of this wonderful church, which opened again for the public in 2005. The most impressive feature of the building is its massive dome. During its construction there were strong doubts about its stability, which turned out to be wrong. Actually, according to tradition, in 1760 during a attack by the Prussian army, the dome was hit by more than 100 cannonballs which bounced off and the church survived. 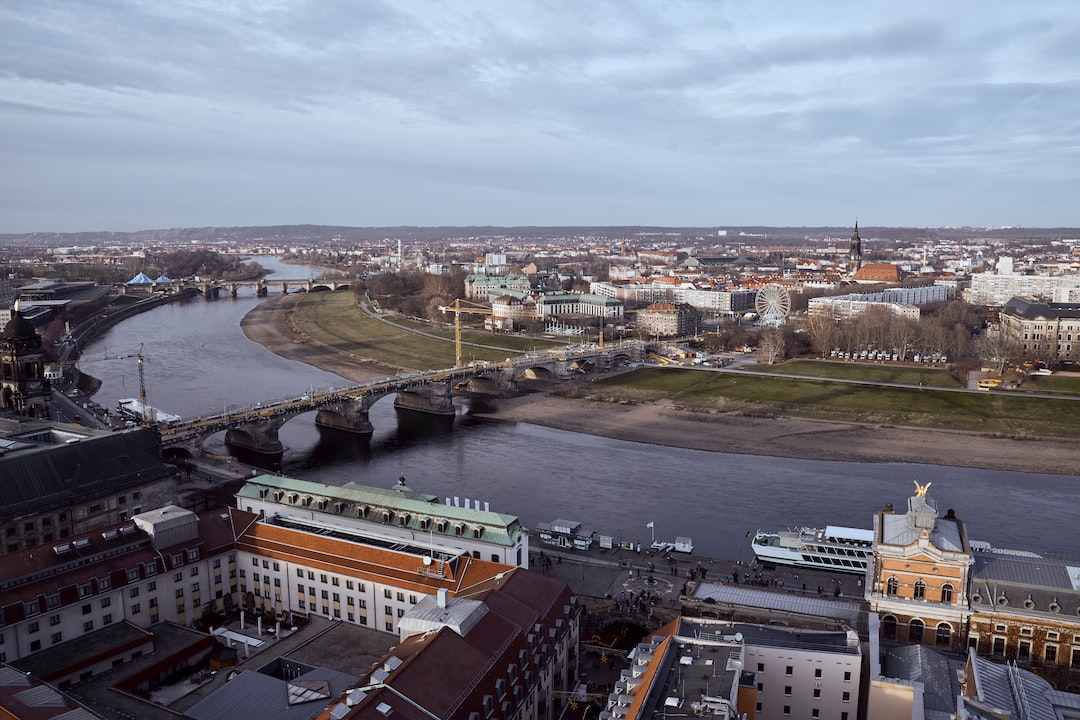 Photo by Denis Jung on Unsplash

Just opposite of the church follow Munzgasse, probably the most picturesque street of the city with many restaurants and cafes, and head towards Elbe River. At the end of the road, go up the stairs and reach Brulhsche Terrase (Bruhl's Terrace). The so-called "Balcony of Europe" is a wide riverside promenade built on ancient fortifications and offers fantastic view of the Elbe and Neustadt. During your walk along the terrace, near the monument for Johann Friedrich Bottger, if you look closely in a guard rail of the terrace garden, you might notice a fingerprint. This dactylogram is said to be proof of August's strength, who is said to have left the mark. At the end of your walk, sit at one of the benches and enjoy the peacefulness of the river and the sight of riverboats passing below Augustusbrucke (Augustus Bridge), which connects the Old and the New part of the city. Especially during sunset, it is an unforgettable spectacle.

Two other buildings that worth a visit are located south of Neumarkt at Altmarkt square. The first is the Neues Rathaus (New Town Hall) with a golden statue of Hercules on its top and the second is Kreuzkirche (Holy Cross Church), which is the oldest church of the city and home to the famous Kreuzchor Boys’ Choir.

During this long walk around the historic center of Dresden, it is certain that you will need a break. Two excellent choices are: Cafe Schinkelwache (Theaterplatz 2) – an old guardhouse transformed into a classic cafe with excellent fresh pastries (you must taste dresdner eiche pastry) and Dresdner Kaffeestubchen (Bautzner Strasse 79) – a small cosy cafe, hidden in the streets behind Frauenkirche, with excellent coffee, pastries and brunch dishes.

An afternoon walk in the historic center of Dresden is one of the top city-break experiences we have had during our travels. The atmosphere, the grandeur of the reconstructed buildings, the elegance, the feeling of happiness and fulfillment for a successful comeback, and the heavy history of the city will turn your visit into a unique and valuable memory.

Road trip in the “Greek Alps” : Elati, Pertouli and beyond

Forgotten sculptures of Athens and their stories

Hoi An is a must when visiting Vietnam