0
Interesting0
Useful0
Vienna is the capital of Austria and one of the most elegant European cities. The former capital of the Austro-Hungarian Empire has kept all the imperial grace of Habsburg dynasty and at the same time it is a city which loves art, music and good food. Vienna has always played an important role in European culture and it has been the home or the birthplace of many famous composers, painters and writers. The city has numerous art museums, concert halls and theatres, and along with its coffee house culture, long tradition in confectionery and vibrant culinary scene, it could please every taste. It is a dream destination for the art lover, the music lover and the food enthusiast.

In this article we are going to suggest a two-day itinerary, adapted to the opening hours of attractions, museums and shops during weekend. We will give the guidelines for the first visit at this wonderful city, in order to understand it and feel its unique ambience.

Day 1 - Saturday :
Start your day at Stephansplatz, the center of the old town. The square is dominated by the emblematic Stephansdom, Vienna's historic cathedral. The church we see today was built in the 14th century on the ruins of two earlier churches. The cathedral has been a witness to many events in Austrian history. During the Siege of Vienna in 1529 and the Battle of Vienna in 1683, its massive south tower (the highest point of the city's skyline) was used as command post and observatory. Its glory is the ornately patterned coloured rooftop, covered by 230.000 glazed tiles and 111 metres long. 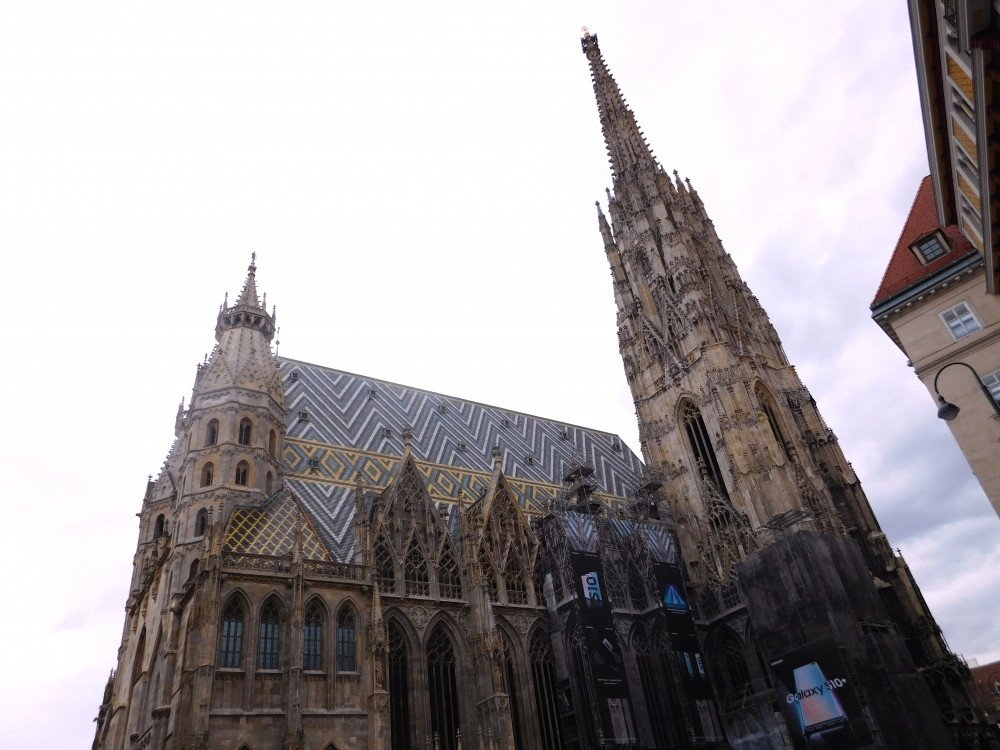 From Stephansplatz follow Graben Street to admire the buildings' majestic facades, the golden plague monument and many international brands stores. If you feel hungry, you could grab a Viennese traditional open sandwich and a small glass of beer at Trzesniewski at Dorotheergasse, just a few metres from Graben . From Graben return back to the square and follow Kartnerstrasse, the main shopping street in the old town. During your walk along Kartnerstrasse you come accross the historic department store Steffl, the famous American Bar designed by Adolf Hoos and many stores of Austrian brands, like Swarovski, Heindl chocolate and EMI Austria (for the fans of classical music). At the end of the street turn right and walk up to Albertinaplatz. 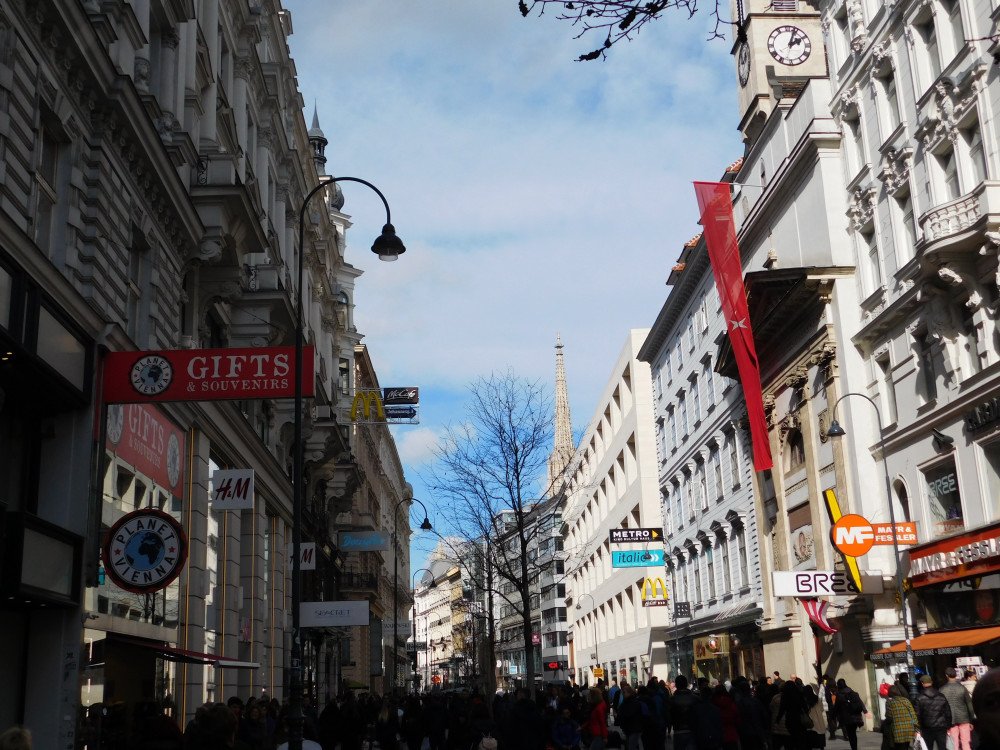 Albertinaplatz is dominated by the statue of the equestrian Archduke Albrecht in front of Albertina, a former part of the palace and now a museum that houses one of the largest and most important print rooms in the world with 65 thousand drawings and approximately 1 million old master prints, as well as more modern graphic works, photographs and architectural drawings (if you want to visit the museum you should spend here at least 2 hours - for information about the museum visit the official site). Just opposite of the museum, at the famous Cafe Mozart you could stop for coffee and to taste the best strudel in Vienna. 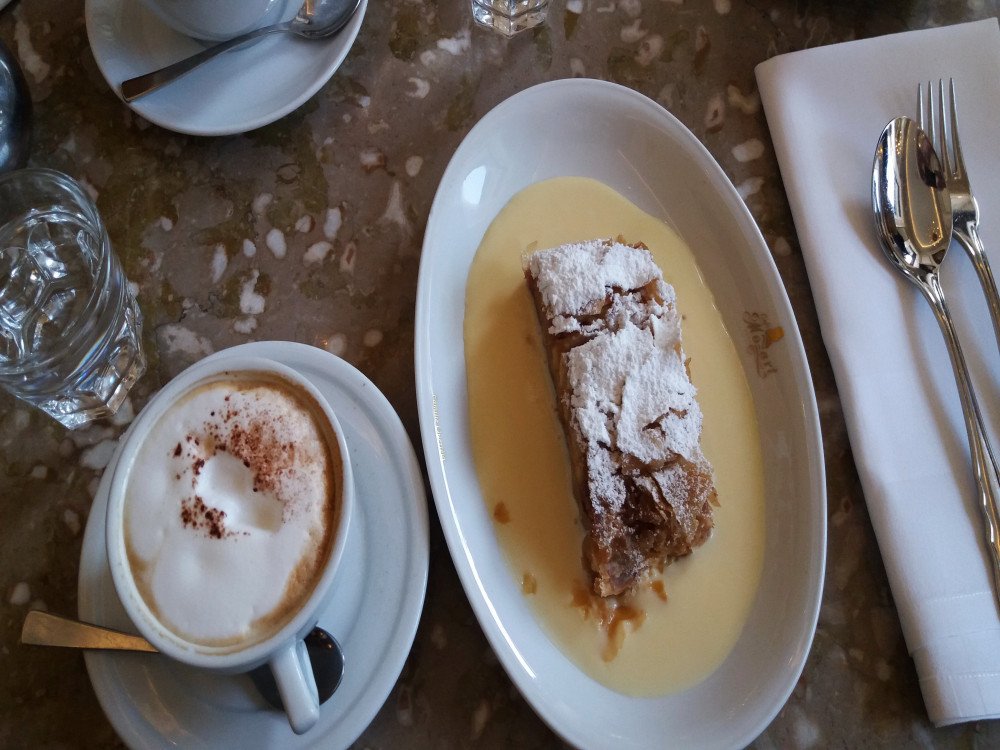 At the end of Albertinaplatz you see the breathtaking building of Staatsoper, the home of the Vienna State Opera, in Neorenaissance style, by the renowned Czech architect and contractor Josef Hlavka. 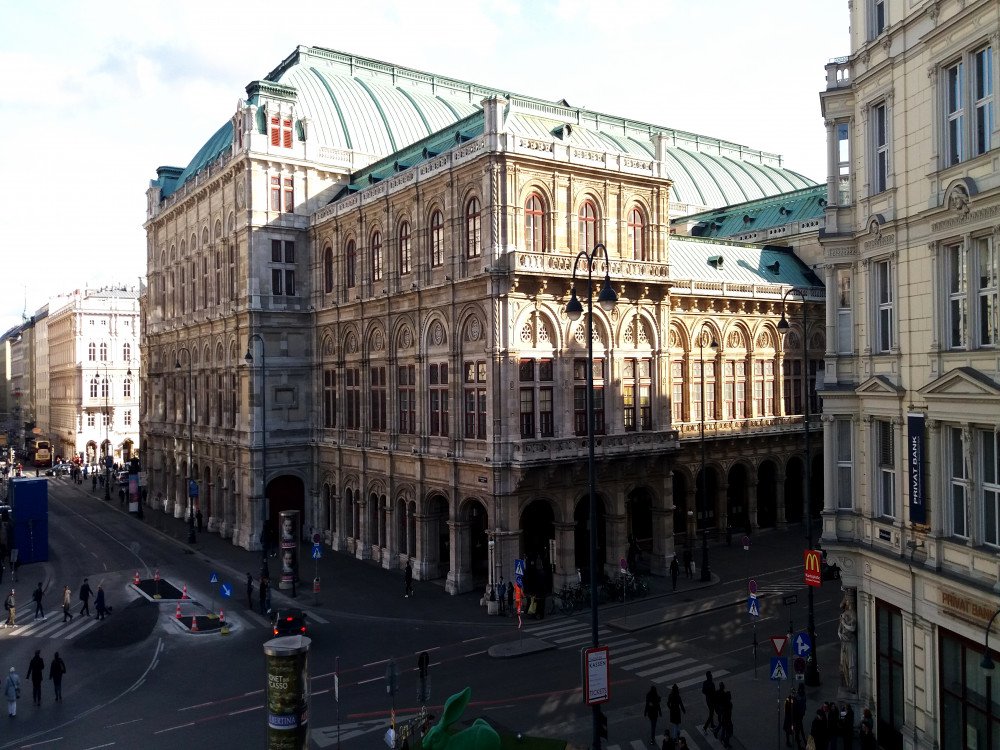 Leave Staatsoper and move ahead, first along Operngasse and then along Friedrichstrasse. After a while you come across the charteristic building of Secession. In 1897, Gustav Klimt and a number of other artists founded a new art association called the Vienna Secession. The building of the same name was completed in 1898 to house an Art Nouveau style exhibition for the association. The leafwork dome is the symbol of the Secession and mounted above the entrance is the motto of the artists association: To each time its art. To art its freedom. Just opposite of the building, Naschmarkt is located. It is the biggest open air market of the city, beloved by locals and tourists alike (open from Monday to Saturday - 06:00 to 21:00). 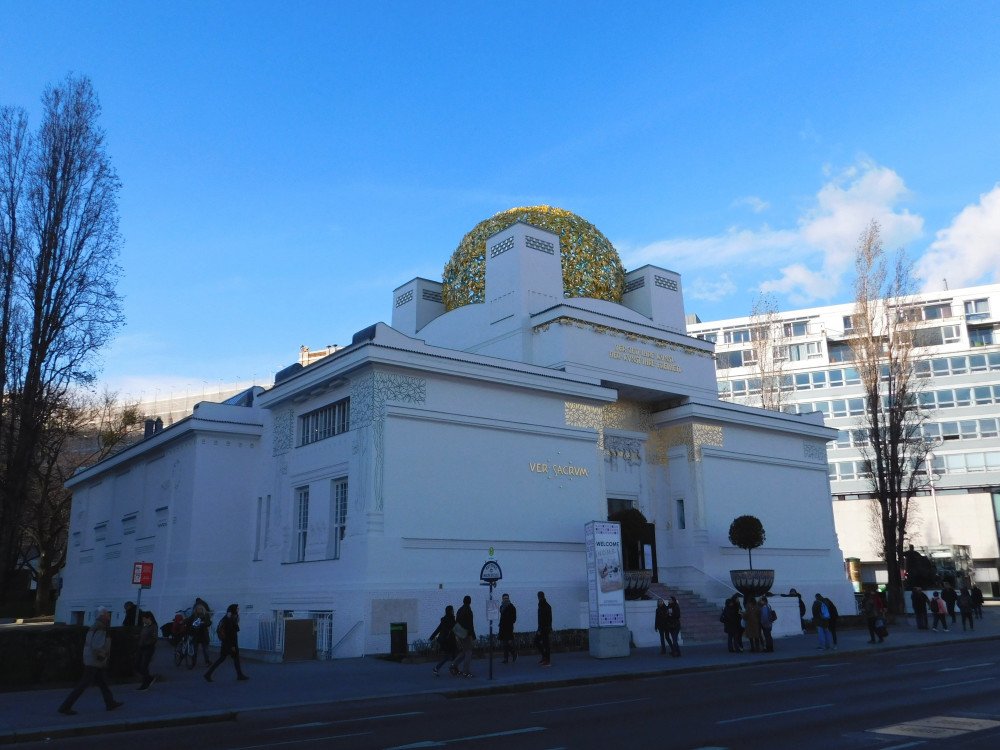 At this point follow Getreidemark street and after 500 metres you see on your left hand the emblematic MuseumsQuartier Wien complex. Once home to the imperial stables, the complex is one of the largest cultural centers in Europe. Developed in the 1980s, it houses a wide range of facilities : art museums, venues for theatre, film and dance, a creativity center for children, cafes, restaurants and shops. The Baroque architecture of the original stables is blended with modern buildings and elements. The main courtyard is a known as "Vienna's living room", a favourite place of the locals for walking and social meeting (for more information about what is going on at the various venues visit the official site).

After the visit to the complex, cross the street and have a stroll around Maria-Theresienplatz [pictured at the top] and the nearby Rathausplatz with the magnificent Neues Rathaus building.

The end of the first day has come and it is time for a good dinner. Book a table at one of the two Figlmuller venues, at the center of the old town and taste one of the best schnitzel in Austria. It is huge, crispy, extra tasty and something you will never forget. There are several places in town that serve good schitzel (like Purstner and Schnitzelwirt) but this one is our favourite. 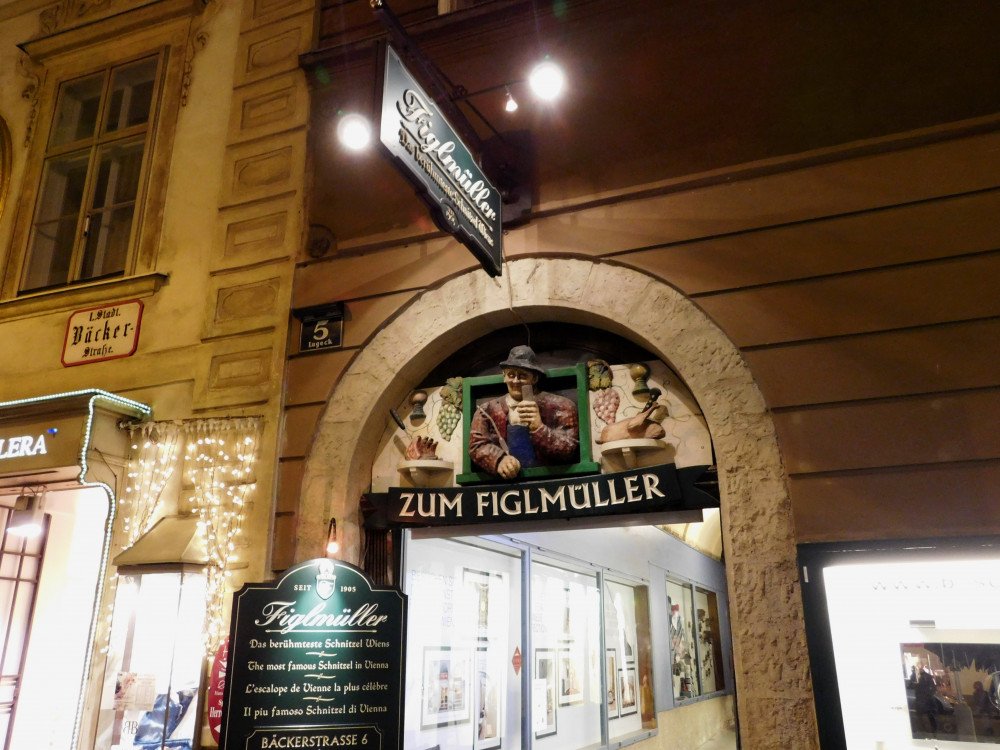 Day 2 - Sunday :
Start your Sunday at the most renowned cafe of Vienna, Cafe Central at Herrengasse (be sure to arrive early because the queue is usually long). The cafe was opened in 1876, and in the late 19th century it became a key meeting place of the Viennese intellectual scene. After coffee, have a walk at the surrounding area, in order to enjoy the peacefulness of the streets and the grace of the Habsburg nobility palaces. 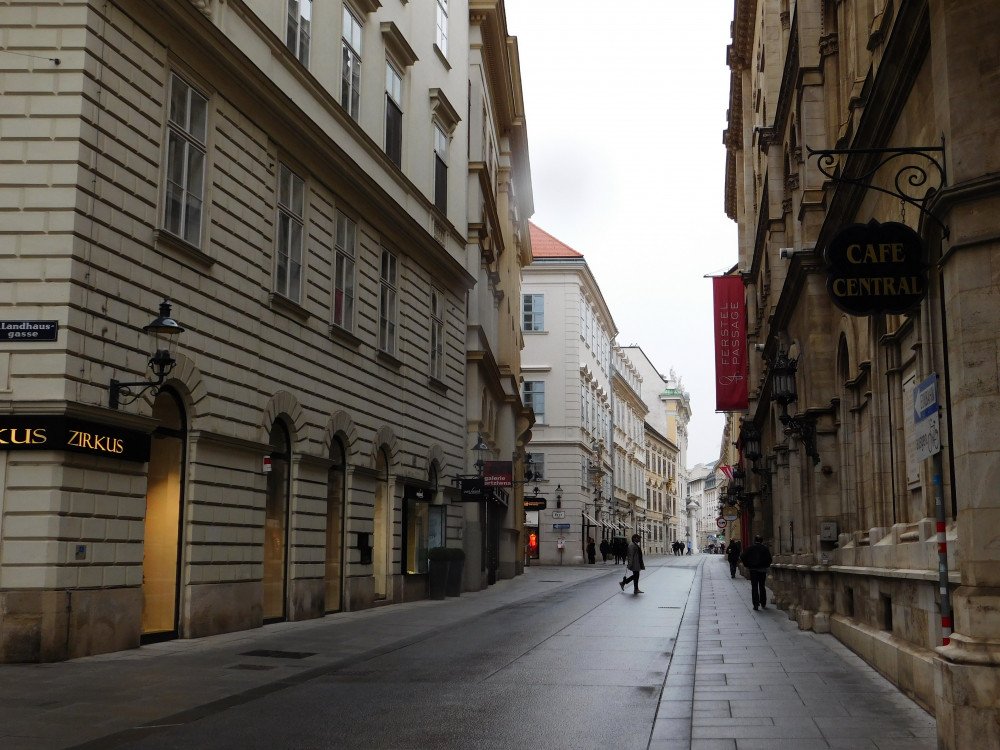 End up walking at Michaelerplatz and see here the Roman remains at the centre of the sqaure, the white Baroque church Michaelerkirche (the place where Mozart's Requiem was performed for the first time) and of course Kohlmarkt, the most elegant pedestrian street in Vienna, with some of the most exclusive shops and remarkable shopfronts (closed on Sundays but wonderful to watch). Kohlmarkt is also the location of the most famous Viennese pastry shop, Demel Konditorei. This shop still bears its imperial patent lettered above the shopfront and it is one of the two places in the city (the other is Hotel Sacher) that have the legal right to produce and sell the authentic sachertorte, the chocolate cake, invented by Austrian Franz Sacher in 1832 for Prince Metternich in Vienna and probably the most famous Viennese culinary specialty. 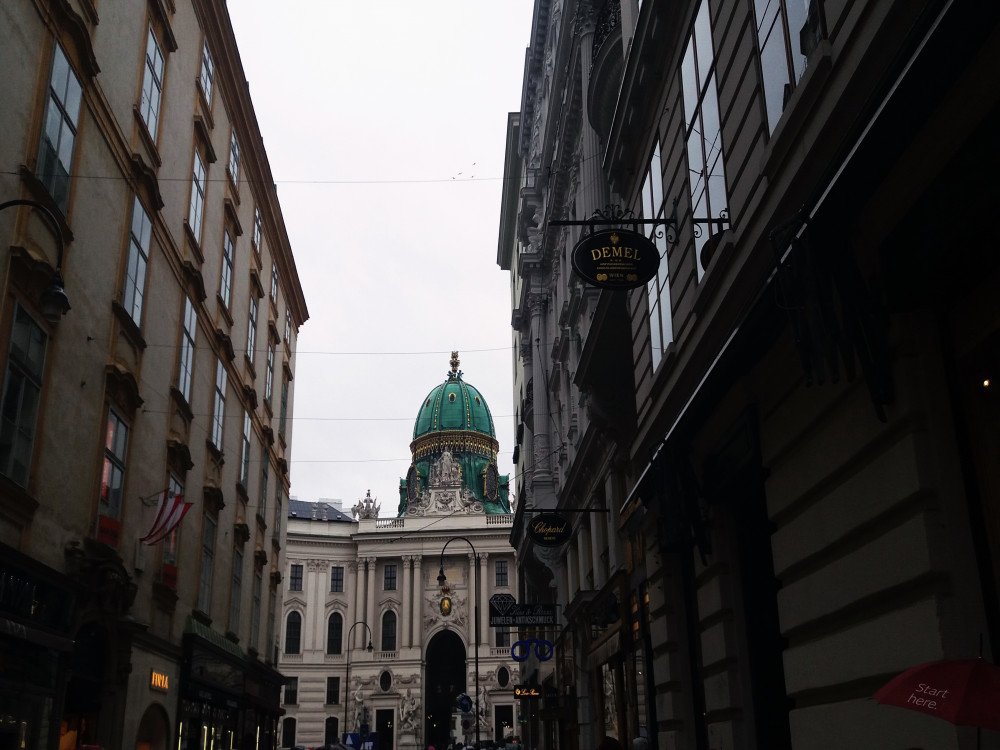 From Kohlmarkt return to Michaelerplatz and the Neo-Baroque Michaelertor, the impressive entrance to Hofburg's palace inner courtyard. On both sides of the doorway are two 19th century wall fountains. At the left side of the entrance, Stallburg is located. This former royal residence was converted to house the Hofburg stables and the Spanish Riding School. The origins of the School are obscure but it is believed to have been founded to cultivate the classic skills of haute ecole horsemanship. Today shows take place in the building, known as the Winter Riding School. The performances are limited, basically during weekends, the tickets quite expensive (our suggestion is to buy a ticket for the standing room) but this is a once-in-a-lifetime experience. The show of the dancing horses and the ability of the riders to control them is a spectacle you will carry with you for ever (book your tickets early and only from the official site - also watch a video to understand the magic of the show ). 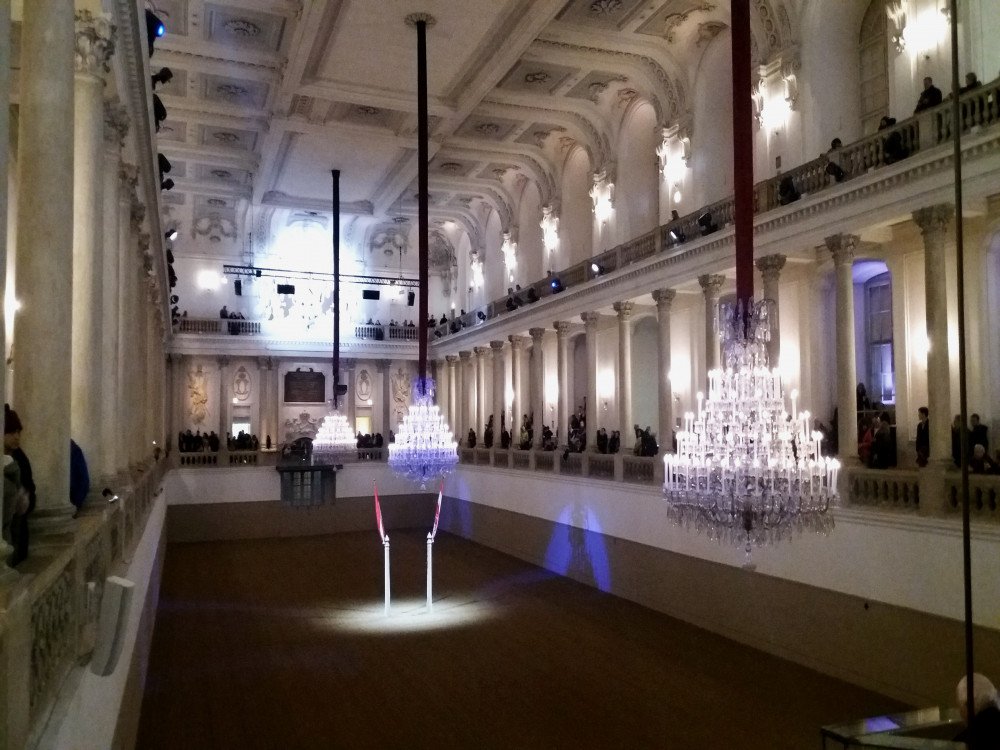 After the show head to Burgring street and take the tram (Line D) for Schloss Belvedere. Belvedere, palaces and gardens, were built as the summer residence of Prince Eugene of Savoy, the military commander who defended the city from the Turks. Belvedere consists of two palaces, with imressive interiors, linked by a spectacular french style garden. Your visit here is focused on Upper Belvedere, which houses an Austrian art collection from Middle Ages to the present day. It is also has a important collection of works by the two most famous Austrian painters, Gustav Klimt and Egon Schiele. There are 24 paintings altogether by Klimt, including the world famous and recognizable "The Kiss" (for information about the museum visit the official site). 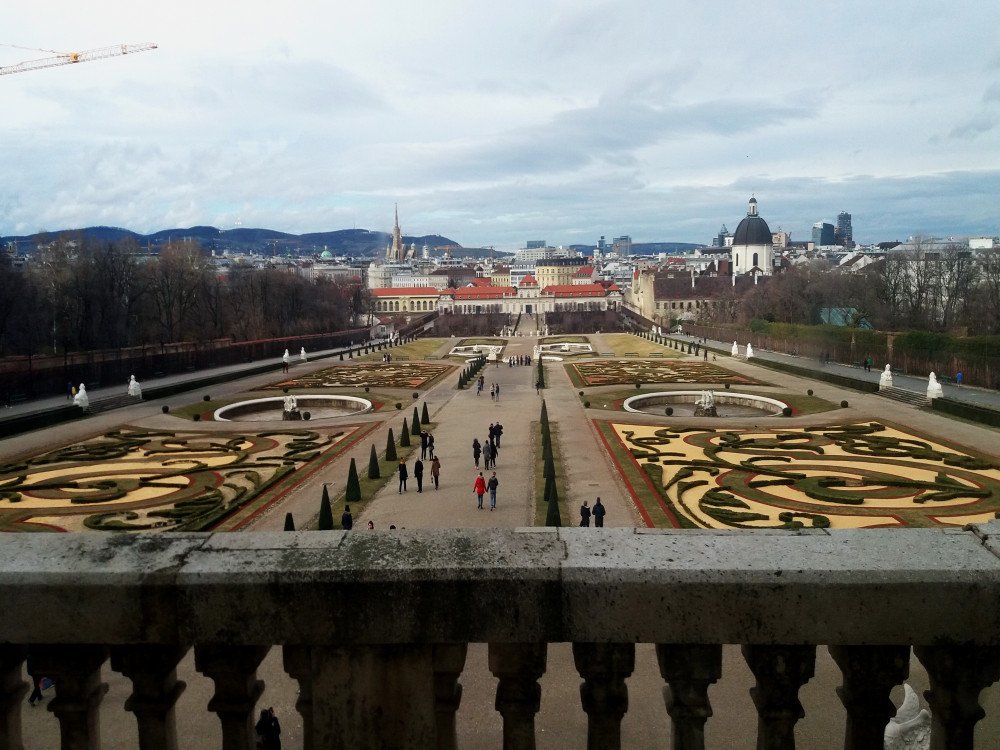 On your way back to the city center make an additional stop to visit Karlsplatz and the Baroque church Karlskirche, an iconic location of the city.

The second and last night in Vienna you could either book tickets for a music concert at Musikverein or a show at Staatsoper or you could just stroll around the Old City and along Danube Canal, where you could have dinner or a drink at one of the boat restaurants like Holy-Moly Am Badeschiff.

During your stay at Vienna if you have the time and especially if your are a movie buff, visit Riesenrad, the famous Ferris wheel in Prater park, which is placed on the list of Treasures of European Film Culture by the European Film Academy in June 2016. For more information about Riesenrad, check our related article.

Vienna is a city with a long legacy and a unique style of living. A weekend in this city could only be an introduction and is never going to be enough. From the moment you leave Vienna your only thought is when to come back. Maybe next time for Christmas in Vienna ?

The 9 Travel Adventures You Need to Explore
Explore
1
We use cookies to collect and analyse information on site performance and usage, and to enhance and customise content and advertisements. By using our site, you consent to our privacy policy and use of cookies. Learn more.