0
Interesting0
Useful0
Cesky Krumlov is a suprisingly beautiful and well preserved medieval town in South Bohemia. It is also one of the most visited sites in Czech Republic. The town was founded in the 13th century and was under the rule of the Rosenberg dynasty until 1611. The dynasty's crest of a five-petalled red rose could still be seen in motifs around town. In 1602 the Rosenbergs sold it to the Habsburg emperor Rudolf II. Afterwards the Eggenbergs ruled for 100 years and finally the Schwarzenbergs took over until 1947. During the Communist era of Czechoslovakia, the town Krumlov fell into disrepair, but since the Velvet Revolution of 1989 much of the town's former beauty has been restored and since 1992 it has been a designated UNESCO World Heritage Site and was given this status along with the historic Prague castle district. 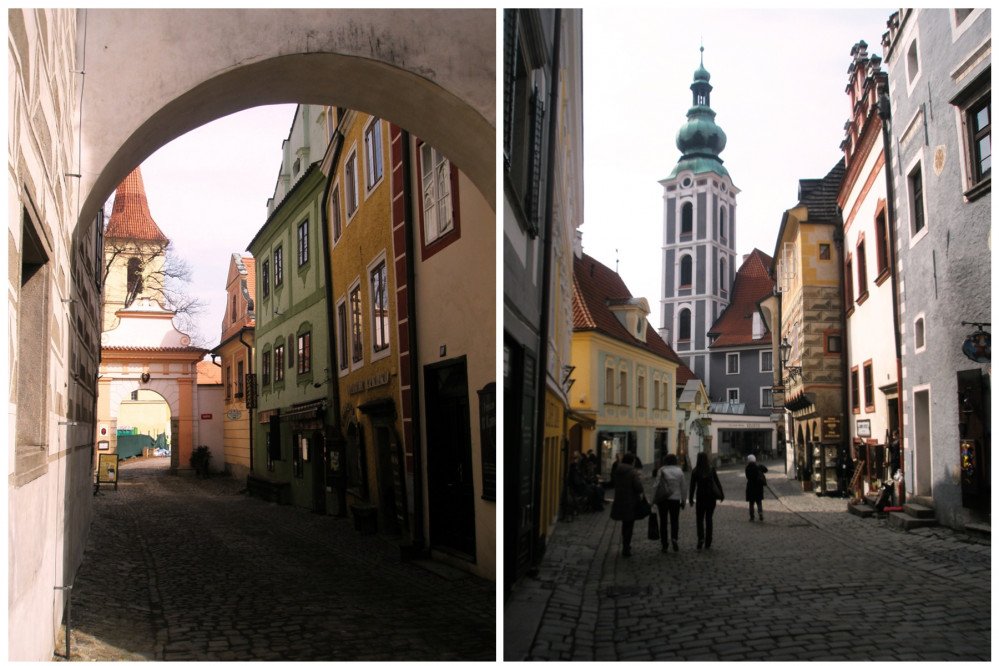 The historic town centre (closed to cars) is situated on the banks of river Vltava (Moldau). The Inner Town is located on the right bank, enclosed on three sides by water, while the left bank features the castle area and Latran village. After leaving your car at the parking areas outside the town centre or arriving by train, the first thing you see is the Renaissance Budejovice Gate [photo above left], the only one surviving of the original eight town gates. 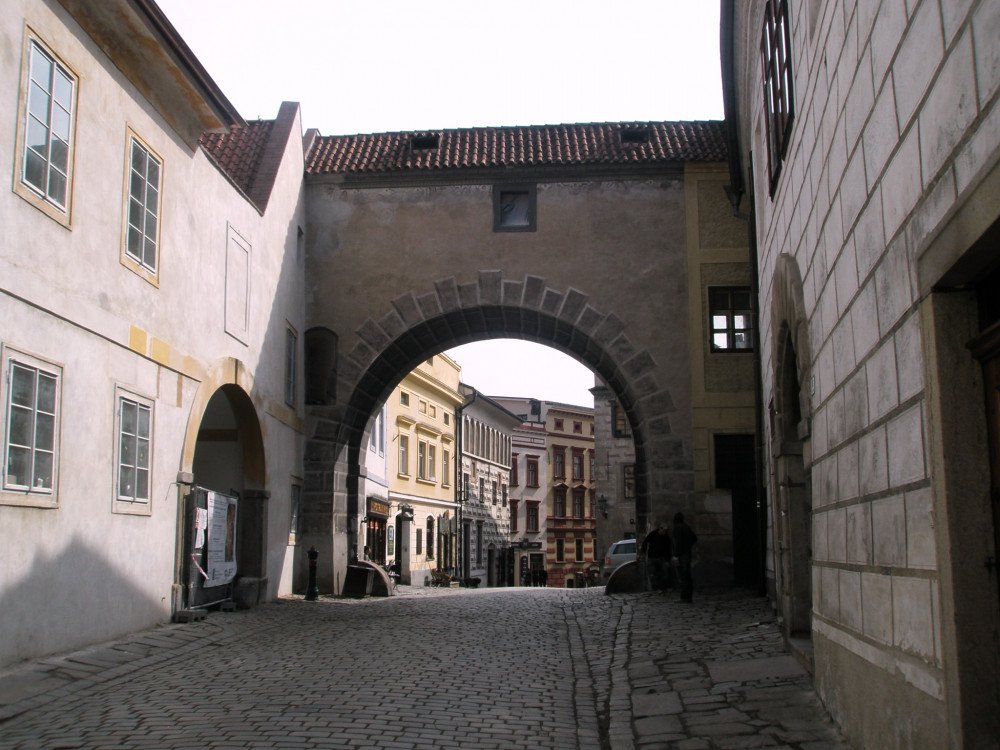 From this point you enter the old neighbourhood of Latran, which was once an autonomous village inhabited by craftsmen and merchants. Along the main street of Latran, except from the many little shops that sell local products and unique gifts, you also come across the surviving Gothic Minorite Monastery complex. At the end of main street a bridge links Latran to Inner Town. 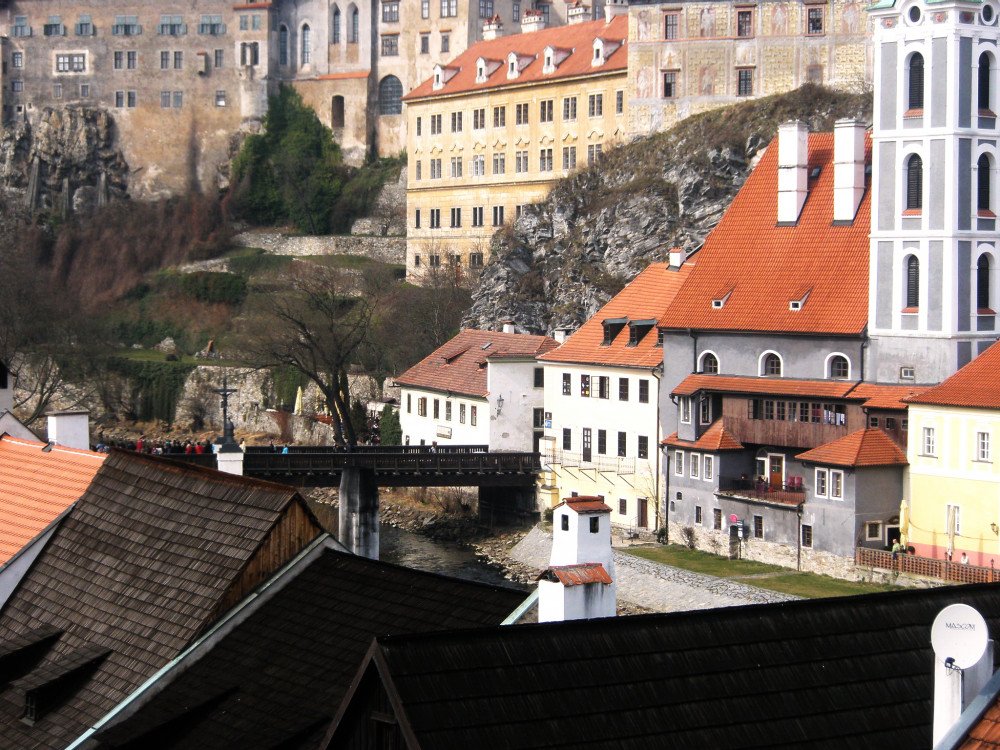 After crossing the bridge, you end up in the main town square, Namesti Svorvosti, which is dominated by the imposing building of the Town Hall. This building was created in the 15th century by joining two former Gothic houses. The Marian plague column at the centre of the square was erected in 1716 in memory of the Black Death that hit the town in 1682. 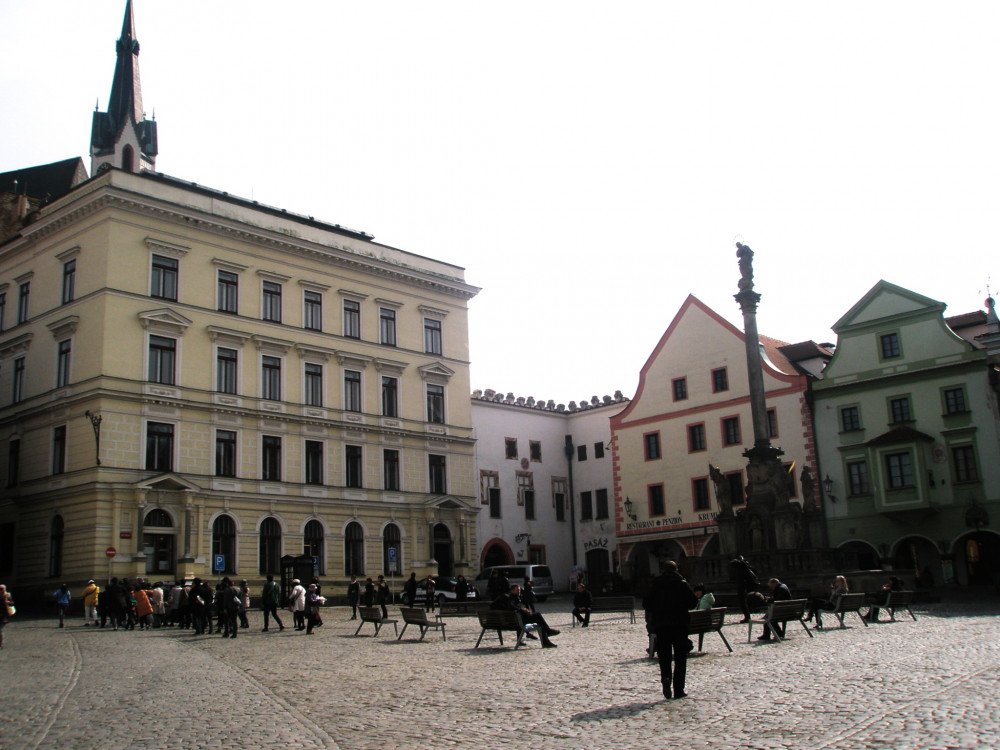 Just next to the square the church of Church of St Vitus is located. It dates back in the 15th century and it is one of the earliest examples of net vaulting in Europe. Its sanctuary by the north side is a characteristic example of stonemasorny of the early 16th century and the walls are covered with Gothic paintings. The church also once hosted the famous Krumlov Madonna (of 1390), regarded as one the finest examples of the International Gothic Style. The painting is now kept in Vienna’s History Museum. 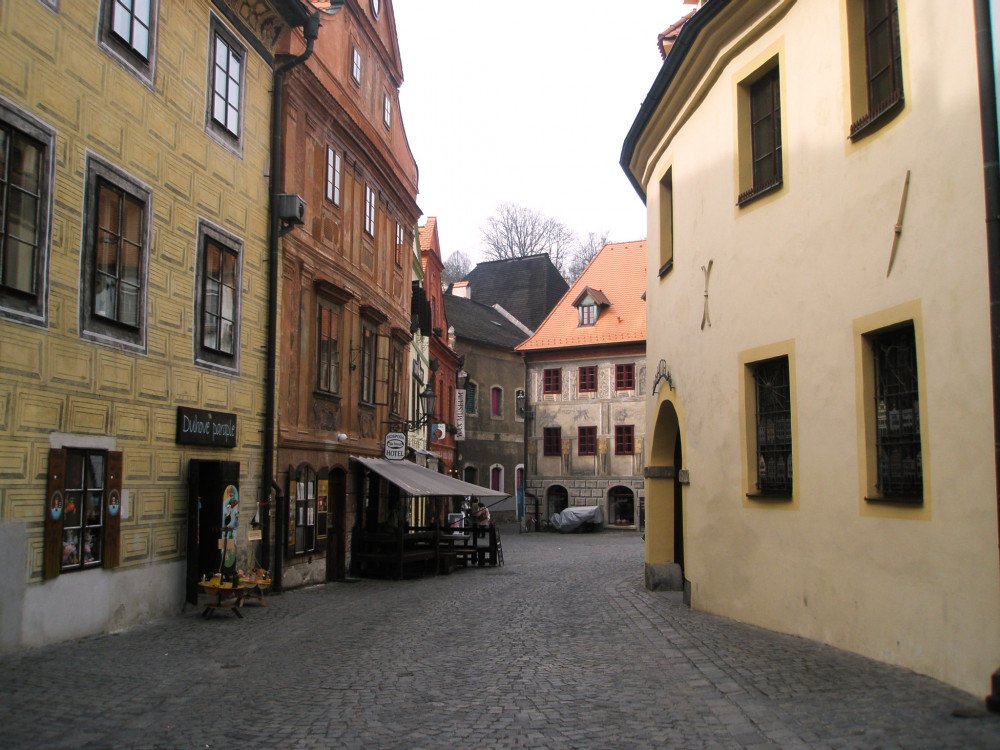 From the square you could either follow Kostelni street with the colourful fairytale facades and the small wonderful shops or you could follow Horni street. At no. 154 of Horni street you see the building of the former Jesuit College (now a hotel) with the wonderful painted facade. A small park just opposite of the buliding offers magnificent view to the town [photo at the top]. 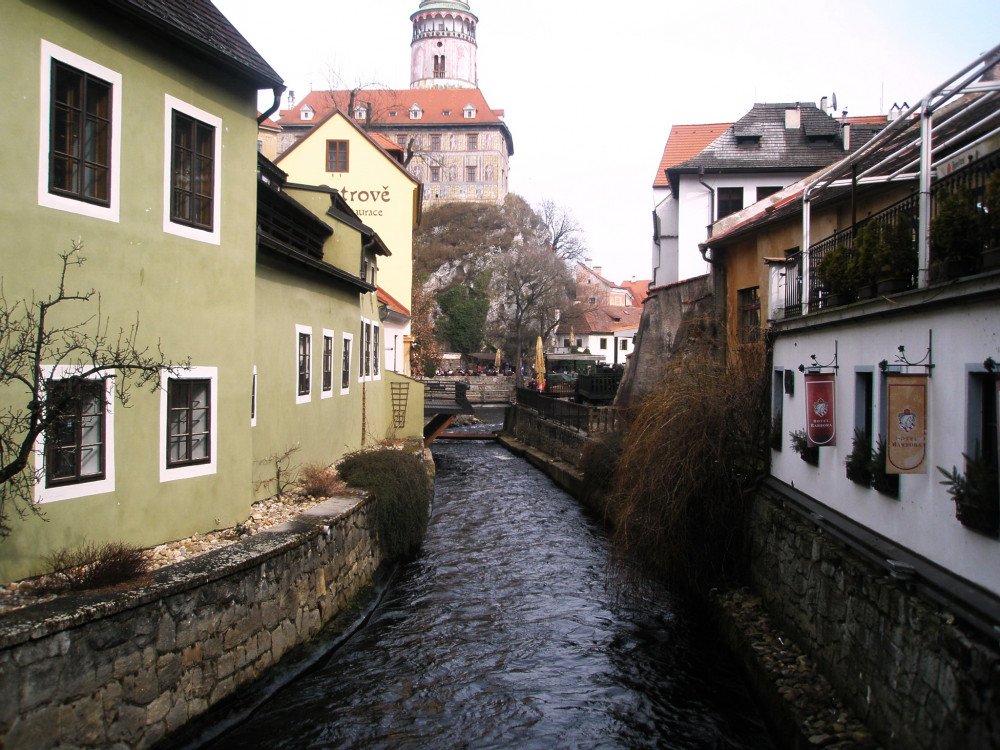 One last interesting site to visit before leaving the Inner Town is the Egon Schiele Art Centrum at no. 71 of Siroka street. A former brewery building now houses a gallery devoted to the famous Austrian painter. Egon Sciele lived in Cesky Krumlov for ten years (1907 – 1917) during which he produced his series of paintings “Dead City”. But his bohemian style of living, visits by young ladies of Krumlov serving as models, the erotic and provocative motives of his drawings could not be tollerated by the inhabitants of Cesky Krymlov and he was forced to leave town. Schiele’s studio from those times still exists at no. 343. of Plesivec street (for more information about the Art Centrum and admission prices visit its official site). 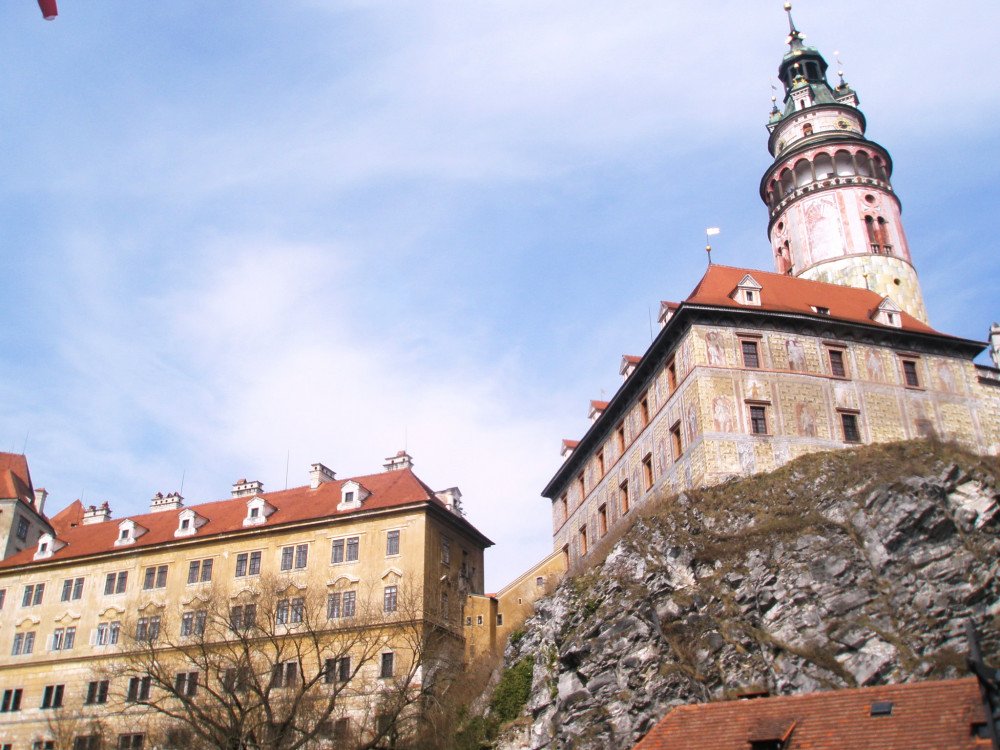 But what stands out in the skyline of Cesky Krumlov is the spectacular Krumlov Castle, located on the left bank of the river and opposite to the Inner Town. The castle is the largest in Czech Republic after the Prague Castle. Its oldest part is the colourful cylindrical tower, called Dolni Hrad. The castle has 300 rooms but the most beautifully decorated are the Rosenberg Rooms with wall paintings and wooden vaults. The most unsual of them is the Hall of Masks with painting depicting carnival scenes. A spectacular tiered bridge connects the castle with the Castle Theatre (for more information, hours,tours and tickets visit the official site). 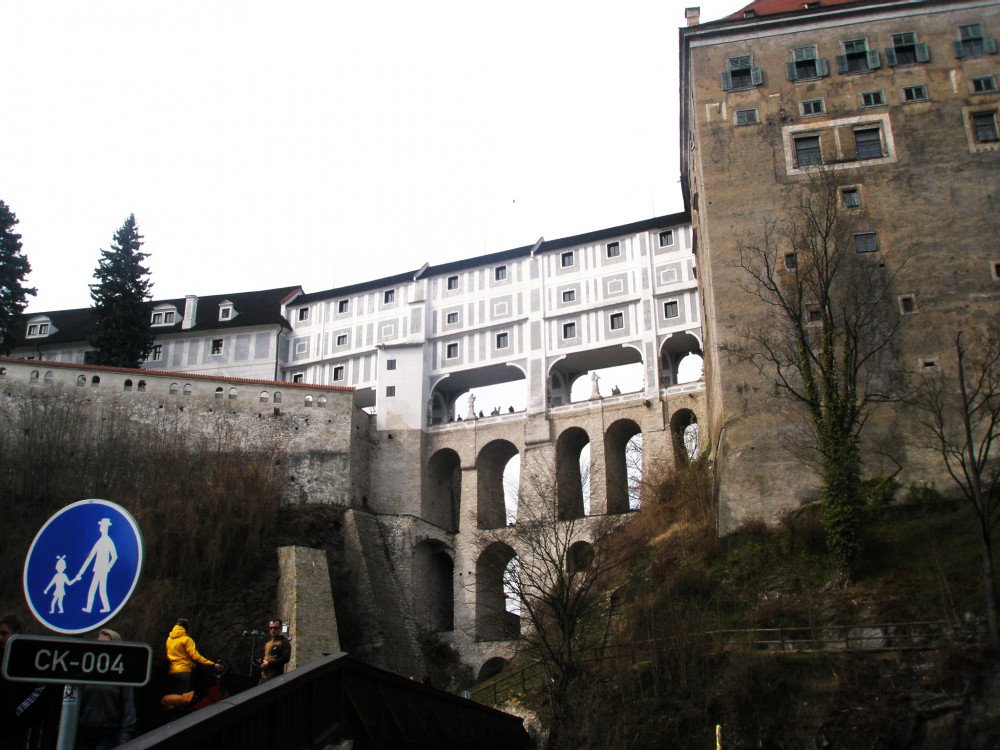 The Baroque theatre is a fascinating example of theatrical life and theatre operation of the previous centuries. The theatre was rebuilt on the site of a previous one in 1767 by the Schwarzenbergs and was closed to the public for restoration from 1966 to 1997. It officially opened again in September 1997. The interior, the stage settings, the costumes and the theatrical machinery (like the machine that simulates the sound of wind) are spectacular and unique and could not be found anywhere else in the world in this quantity and quality. 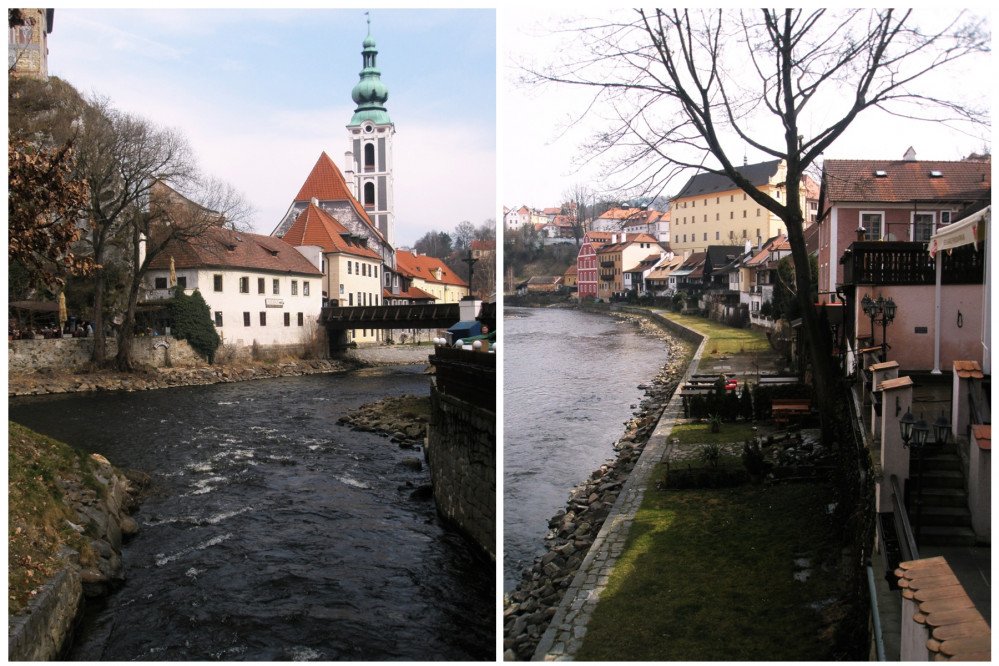 During your walk around town you meet numerous cafes and restaurants. Our favourite place for lunch or dinner is certainly U Dwau Maryi, which means “The Tavern of Two Maries” at no. 104 of Parkan street. The tavern is located in an authentic medieval house which was restored in the 1950s. During the restoration two wall paintings representing the Virgin Mary on the facade were discovered. The owners of the tavern, which opened in 1990, have preserved the interior as authentic as it could be and have made a survey on traditional bohemian cousine. The experience is unrivalled and the food delicious. The few tables at the small balcony offer marvellous view to the river (during Summer there is also outdoor sitting by the river).

One last stop before leaving this exceptional town should be Cesky Pernik, a fine shop on Latran main street, where you could buy traditional products, especially Bohemian gingerbreads, hand pressed into wooden molds, and also very tasty local cream honey.

Cesky Krumlov is one of these places, which you will remember forever. It is a perfectly preserved town with a unique ambience, that will astonish you. The visit here is a travel back in time, to the Bohemian past of princes, princesses, knights and kings. It is like opening a door and entering the world of fairytales. Do not rush to leave town, because the return to real world could be hard.